War For The Soul of a Nation 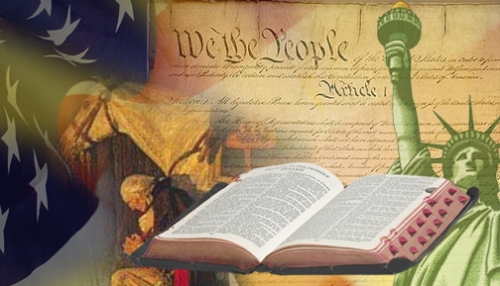 Jesus has told us to judge the things in this life by the fruits which they produce. (Matthew 7:16)

In terms of our present culture, the fruit is rotten. Yet rotteness is peddled by the Secularists, the Socialists and the Left as good and better than the stuff America used to serve as part of it’s diet.

The Rev. Peter Marshall discusses this topic in his latest essay, which by and large I agree with.

Where I disagree with Mr. Marshall is more in perception than fact, but since perception is reality – and the fruits are borne thereof in our culture – I think his assertion that
Conservative Christian views are the majority view of the people is hopeful at best.

If those are truly the majority view of this people, then we are losing ground daily and becomming more silent as the days progress.

Mr. Marshall is an optimist on this score. A majority may indeed have Conservative social leanings, but a silent majority will become slaves to a rebellious vocal minority every single time. Communist regimes, dictatorships and even Jihadist nations are repleat with examples of how a minority can grab power and subjugate a majority to slavery and death with promises built on good intentions. Lately, the Secular Left has become more open and truthful about what they intend and believe, and they no longer go to such great lengths to disguise themselves. They hate Christians and religion. They seek to abolish it. They seek to create a new Morality, imposed by force of law.

There is little outrage, little passion, little outspokeness and little challenge by the bulk of Conservative Christians in this country to the growing shouts to bury and remove our Christian Foundations by such people. In the face of relentless attacks by the Secular Left and the grinds of daily life – fire and passion to recapture our culture and heritage is voiced by the very few, and merely gets a silent nod by those that we HOPE are still a majority opinion. Christian Americans are become hearers only, while the doing is getting lost in multicultural morass and the daily struggles to make a living.

If we are to judge the fruits – the few who do speak up are not producing enough to stem the tide of the secular and cultural locusts stripping the branches bare.

Some pest control experts are needed to get active and cultivating this ground we stand on to resist the plagues of the Secular Left. If things continue at the pace they are going in this nation, a famine of the Word is sure to be in our future.

Making Sense of the Culture Wars

Americans are fundamentally a religious people. And we are currently engaged in an all-out moral and spiritual struggle for the soul of the nation….

…The Democrats have been pandering for votes among primarily secularist groups that have arrayed themselves against the traditional religious mind-set, or worldview, of the majority of Americans. I refer to the ACLU activists; the MoveOn. org types; the homosexual activists and their supporters; the abortion-rights activists and their followers; the animal-rights and environmentalist whackos; those permanently on welfare (a shrinking number in recent years) and the welfare bureaucracy; most of the Hollywood crowd; the vast majority of the academic establishment at our colleges and universities; the majority of the print/radio/TV media; etc., etc. So, if these candidates are going to toe the Party line, they have created a nasty conflict for themselves. They can’t publicly and openly take the positions of their backers on the cultural issues without alienating the majority of the moderate Americans, whose votes they need in order to get elected…

…if you get down to the bottom of the barrel in our American culture wars, what you have is a war over religion. Most anti-religious secularists vote the Democratic ticket, but most Democrats are not secularists. We Americans are basically a religious people, so the real war is not one of religion vs. irreligion; the real war is over what our religion requires of us in terms of public policy, or how we are going to live together as a people.

…We’re not very denominationally minded, and we don’t think any more highly of church bureaucracies than we think of government bureaucracies. Our religion tends to be more private these days, because with both husband and wife working and the kids’ team practices and games, we have less and less time for “church stuff.” Though we don’t much trust TV preachers, and don’t hold our priests and preachers in as much regard as we used to because of the scandals, it doesn’t mean that we don’t believe in Jesus and God any more. We do. We just aren’t up for organized religion much any more.

The last paragraph I agree with more than one would know. Of all the people I encounter, the disgust with organized “church” is as vehement as the disgust in our national politics – but, as with all things and human nature – those in power do not relinquish their status without a fight of some kind.

Given the pacifist Judge-Not mentality of a good number of Christians – it seems living under oppression is preferable than the risk to stand up and defy the status quo.