Obama Outlines His Plans For His SS and Brownshirt Citizenry 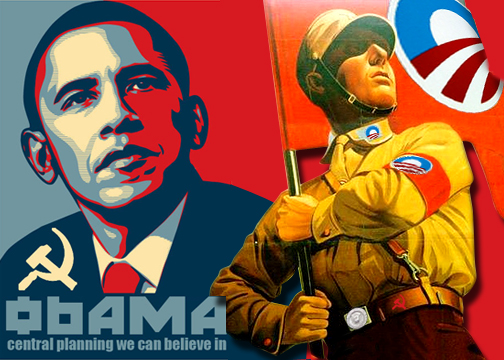 Watch, and understand this is the exact pretext Hitler used to militarize the SS to be used against the People.

Tie this with the entry earlier about Obama’s Pals planning to “eliminate” 25 million Americans who will not be ‘re-educated” and do you get the picture of what is taking shape here?

Here, watch the messiah yourself discuss this plan to create a ‘Civilian Defense Force’.

According to the Constitution – we already HAVE a civilian defense force – it’s called the MILITIA.

But Obama is having none of that.  His pals plan to cut the Defense Budget 25% and make this “Civilian Security Force” as powerful and as well funded as the military?

His Elite SS, the Stasi, his domestic secret police forces.

What he plans is far more serious and grave than you can imagine.  We best wake up.

“So this is how liberty dies.  To thunderous applause” – Padme Amidala, Star Wars Episode III: Revenge of the Sith.

America Asks For A King 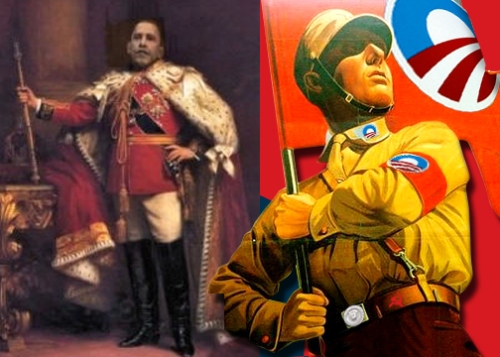 America asks for a king

I am an attorney and professor of law and entrepreneurship, so I usually confine my commentary to matters of public policy, and leave theology to those who have chosen that field of study. But since today is Sunday, I will take the liberty of making an observation with a more Biblical bent.
As one who has taught entrepreneurship and entrepreneurial thinking for nearly ten years, I am distressed by the apparently overwhelming sentiment sweeping Americans that they must now be taken care of. I know from years of studying the matter that a society in which most members are – or can be – entrepreneurial, is a society where upward mobility is the rule; where wealth is created – not just “spread around”; where hope is common currency; where the inevitable problems are viewed as opportunities to find sustainable solutions, and where those solutions are typically new industries, new companies, and new jobs. An entrepreneurial society is a society where most people wish to, and know they can, take care of themselves, their families, and even others in need. Where charity and philanthropy are fellow-travelers with success.

Joe the Plumber’s exposure of Obama’s “spread the wealth” philosophy exploded like a flash fire, not only because that philosophy is utterly anti-American, but because it is shortsighted, and immoral. It is short-sighted, because in an economy that is a bit battered and fragile, what we need are more businesses, more workers, and more wealth creation in the private sector, not more government programs and more people dependent upon them. It is short-sighted because it is a failed business model. And, as we saw with the collapse of major lending institutions a few weeks ago, a failed business model, made larger (or “spread around,” if you prefer) by government, is not just a failure, but a catastrophic failure. So it was with the irresponsible lending practices foisted on American banks by the government, and so it will be with the irresponsible spending and doomed reliance on government largesse that Obama and the Democrats are peddling as salvation.

And the inevitability of its failure is why Obama’s philosophies are not just foolhardy, but immoral. It is immoral to deceive well-meaning people about what you intend to do with their money. It is immoral to take by force from those who produce, give to others who do not, and call it “charity.” It is staggeringly immoral to create an ever-larger class of dependent, helpless people who will be doomed to starve when the unsustainable system you have created collapses. And most of all, it is profoundly immoral to set yourself up as a secular messiah of sorts, assuring people that you will take care of them, eliminate hardship, heal the planet, and hold enemies at bay by the sheer force of your own hypnotic rhetoric.
Obama’s economic and social theories have been debunked and disproven (at great human cost) so many times over the past 100 years that it’s laughable anyone still believes in them. But at least his designs on the country are understandable. Those who crave power will use any tactic, as long as it works.

It’s the fact that it’s working that is inscrutable to me. And this is where the Biblical references come in. Americans’ attitude toward this posturing, self-important, political zealot remind me of the Israelites’ demand for a king, as recounted in the Book of Samuel:

When Samuel grew old, he appointed his sons as judges for Israel. The name of his firstborn was Joel and the name of his second was Abijah, and they served at Beersheba. But his sons did not walk in his ways. They turned aside after dishonest gain and accepted bribes and perverted justice. So all the elders of Israel gathered together and came to Samuel at Ramah. They said to him, “You are old, and your sons do not walk in your ways; now appoint a king to lead us, such as all the other nations have.” But when they said, “Give us a king to lead us,” this displeased Samuel; so he prayed to the LORD. And the LORD told him: “Listen to all that the people are saying to you; it is not you they have rejected, but they have rejected Me as their king. As they have done from the day I brought them up out of Egypt until this day, forsaking Me and serving other gods, so they are doing to you. Now listen to them; but warn them solemnly and let them know what the king who will reign over them will do.” Samuel told all the words of the LORD to the people who were asking him for a king. He said, “This is what the king who will reign over you will do: He will take your sons and make them serve with his chariots and horses, and they will run in front of his chariots … He will take your daughters to be perfumers and cooks and bakers. He will take the best of your fields and vineyards and olive groves and give them to his attendants. He will take a tenth of your grain and of your vintage and give it to his officials and attendants. Your menservants and maidservants and the best of your cattle and donkeys he will take for his own use. He will take a tenth of your flocks, and you yourselves will become his slaves. When that day comes, you will cry out for relief from the king you have chosen, and the LORD will not answer you in that day.” But the people refused to listen to Samuel. “No!” they said. “We want a king over us. Then we will be like all the other nations, with a king to lead us and to go out before us and fight our battles.” When Samuel heard all that the people said, he repeated it before the LORD. The LORD answered, “Listen to them and give them a king.” (1 Samuel 8:1-22)

The comparisons are telling: Americans are understandably fed up with corruption, greed, and perversion of justice in our leaders. But till now, we have asked for no king, because we could take care of ourselves, and because we have always been a godly people. But look around now – our children languish in failing, crumbling, unsafe, and undisciplined schools, many of which are merely bastions of social experimentation. Our cities are riddled with crime. Our families are devastated by divorce, abuse, illegitimacy, absent fathers, and definitions of “marriage” that fluctuate with the sexual predilections du jour. Our culture – books, films, music – is saturated with violence and perversion that even the smallest child is exposed to. And of course, one cannot forget – the high watermark of freedom and femininity, and the litmus test of liberty for the Left is the unfettered right to kill our own children in our wombs (or leave them to die outside of them).

This is what we, as a nation, have brought ourselves to. These are problems that no amount of social spending will cure, and any promise to do so is a lie, because no amount of money will change people’s hearts. And yet, instead of reaching deep within ourselves to find the solutions, we now whine and mewl for someone to save us.

And here he comes, Barack Obama, on a “righteous wind.”

As with anyone who would be king, Obama will take our money and our property in ever-larger amounts. Our children will be saddled with debt and beholden to a bloated government that will enslave the very people it promised to help. We will be at the mercy of our enemies. And no matter how bleak or desperate our own lives becomes, the leaders in Obama’s government will always thrive; such people always do. Nor is any of this is unique to Obama; it is in the nature of every king, and every government, which is why our government was originally set up to be limited, both to protect us, and to ensure our own self-reliance.

John McCain will not be a perfect President. But it is not necessary for the leader of a free, righteous, and entrepreneurial people to be perfect. I can support John McCain because he asks only that I vote for him, not that I worship him. And I will vote for John McCain on November 4th, not because he would be a better king, but because he does not claim to be one at all.
Neither McCain nor Obama is a king who will save us; we must turn instead to the only One who can.