The Winds of Persecution Blow 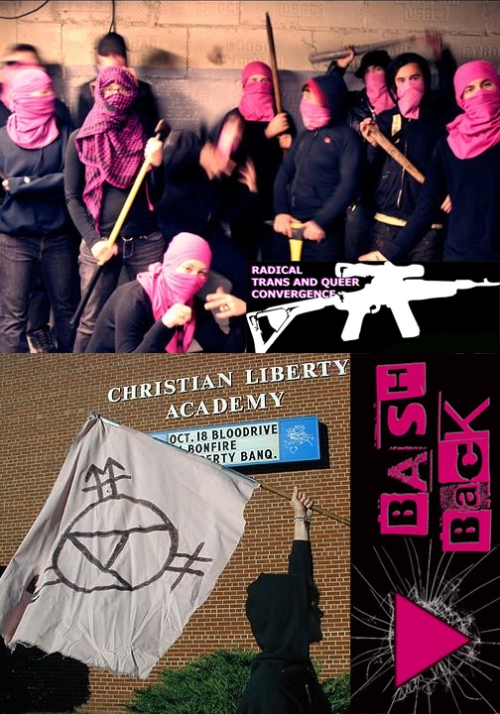 No, the above picture is not a picture of Jihadists and militant proponents of Islam, but militant homosexual anarchists that have gone ballistic over the passage of Proposition 8 banning Gay Marriage in California.

I find it ironic that the on the same week as the anniversary of Kristallnacht 70 years ago this past Sunday – another mobbed is whipped into hatred and frenzied rage against a religious people.  The rage is sweeping the country in the post-Obama, post Prop-8 Election aftermath where the radical Left, asserting victory in both the election and the Culture War has declared outright war on the Religious Right.

Near-riots have engulfed California  and the angry mob has targeted churches to vent their rage over the decision by California voters to ban Homosexual marriage in the State’s Constitution.  Homosexual mobs and rabid Leftists surrounded the Mormon Temple in Oakland and protested.  They also protested Rick Warren’s Saddleback Church and the Catholic Cathedral in L.A.

As one protester stated: “What a lot of religious people of all faiths did to us on last Tuesday was just wrong …We don’t want to bother them at their church, but they bothered us at the polls.’’

So in other words, because people of faith voted their conscience as provided by the Constitution – they dared “bother” the deviate with their vote and now the deviates will seek retribution because of their vote. I thought these people cherished democracy?   What these mobs have illustrated is that your right to vote, your right to speak, your right to protest is a right only THEY are allowed to have.  You and I are to sit down and shut up while they force us to call a sin goodness by demand.  The mob will attack you for exercising the same rights they claim for themselves.

For the radical Left, democracy only applies when they get what they want.  If a vote goes against what they demand, they will riot and assault to terrorize the community into submitting to their demands.

We used to call this tyranny and mob action by malcontents, but today the mob and the media will simply call it a ‘demonstration’.

Even when Christians are assaulted by these mobs.

An elderly Christian lady, who was bold enough to stand up and assert her faith, her opinion on the public court steps was assaulted by these mobs.  I daresay this lady has more guts and faith than the majority of the preachers and pastors in the pulpits of America.

She was assaulted for it.

But it does not end there.

In Lansing Michigan on Sunday, A gay anarchist group infiltrated the Mt. Hope Baptist Church in Eaton County Sunday morning while part of the group protested outside, infiltrators inside then disrupted the service pulling a fire alarm, dropping leaflets and screaming at parishioners in their own house of worship.

We may wave off these actions as limited, as a tiny aberration by a small group of disgruntled minorities – but you would be ignorant of the rising zeitgeist blanketing the nation.

The Marxist/Radical Left in this country HATE Biblical Christianity.  In fact, the radical Left has allied itself with radical Islam and dictatorial Socialists in an unholy alliance against America and biblical Christianity. The portents of both conflict and persecution against those of faith has gone up a hundredfold in the past week.

I am watching the signs, and the storm clouds of biblical Christian persecution are gathering in America.  Already the winds of hatred are blowing.  A new Christianity of Secular Leftists is being decreed the “real” Christianity in America, and seeks to deconstruct biblical faith in the country.

Unfortunately, the Christian Church in America only has itself to blame for the coming assault and persecution of faith.  They rolled over and let the culture fall to the secular hedonists, and instead of influencing the culture to stay the straight and narrow path – the church has hid itself from the culture, or has been corrupted by the culture itself.

Perhaps if Christians had the convictions and fortitude of the lady in the video, we would not be witnessing a light repeat of history.

But the storm itself is just gathering it’s strength, building.  The time will come soon when the storm matures to it’s full fury, and blows across the land.