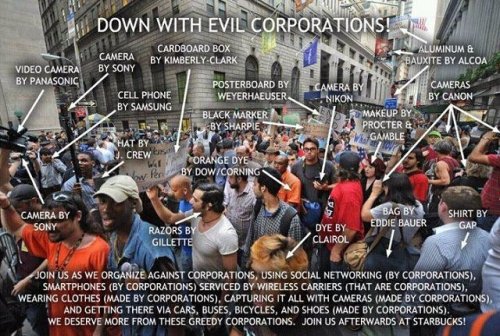 The Occupy Wall Street/Days of Rage Protests showcase the imbecility that has enslaved a once free people.

Regardless of the fact that overt Communists/Marxists and America-hating agendas are behind the organizing, funding and stoking of the US Days of Rage protests, it’s disconcerting to read how so many in this country actually side with the idea’s these protesters are promoting, when their ultimate aim is of making America a full-blown Communist dictatorship.

When I said in my previous entry that this absurd and romantic notion of a glorious ‘people’s revolution’ would ultimately make the French blush, I wasn’t being facetious.  America has been led to a place that Robspierre himself couldn’t have imagined.  An entire continent led to hate businesses, wealth and those who have been led to think they are entitled to the private wealth and property of others they think ‘stole it’ from them.  This is a dangerous zeitgeist beyond what existed in 1789 France, when The Terror struck at the behest of a stoked mob to hate the monarchy and anyone accused of having benefitted from the deposed regime.

What is more alarming to me, is watching the Ron Paul mob zombies/supporters/Libertarians rant in solidarity with the useful Marxist idiots chanting in the streets.  While the Ron Paul/Alex Jones acolytes will chant their mantra of blaming banks, Jews and the Fed for all the woe and misery that they need to be punished for –  the Leftists are chanting about hating the wealthy and demanding the rich whites and Conservatives need punishing while suggesting rewriting the Constitution to impose the planks of raw Communism.  Never before in our history has the liberty of the whole people been in such danger of being eliminated and replaced by tyranny.  Not even the 1860’s match the risk and precipice we now stand today.  And it will come by the demand of the mobs that demand the heads of those they have been brainwashed into hating.

Once such a bloodletting begins, I guarantee you – it will not stop at the current targets of ‘corporations’, ‘banks’, and ‘the Fed’.  It will grow to include ANYONE that is deemed to have benefitted from the society that this Communist-Marxist-stoked  uprising has deemed the enemy of the people.  You can read it on forum discussions already. Anyone who does not support the chosen path and political saviors the mob has decided to pledge themselves, are enemies that they will demand be punished, stripped and even killed.  This is human nature at it’s purest form.  This is the history of mankind.  And from the lessons of history, similar mobs led to hate the former foundations of civil society, and a miasma of strife and death followed.  I see rivers of blood coming, massive privation and misery being the fruits of what these mobs will bear.

Why do I call this useful idiocy?  Simple.  When gross corruption and unrighteousness have been institutionalized by the ruling class and tolerated by the working class, the clamor for correction and punishment when real misery is felt, is easily manipulated by the Ruling Class as the people search for someone and something to blame.

The Left blame Conservatives and Capitalism.  Ron Paul’s brigades blame the Feds and “neocons” with Capitalism being cited as totally corrupted by cronyism.  Both of them become united in going to war on those in “power”, though they might each blame different elements.  This happened in 1789 France. Blaming the Monarchy towards it’s overthrow transformed quickly into blaming the church, blaming the aristocracy, to blaming anyone with wealth or even perceived wealth for the misery that followed.  Blood flowed in the streets and innocents falsely accused in the bloodlust were executed by thirsty mobs eager to rend their misguided notions of ‘justice’.

What you have going on here, is no different.  An opening act to the unravelling of a civil society because both mobs blame those with power.   The Left will blame the power of Race, Capitalism and Wealth,  The Libertarians blame the Fed, Corporations and the military industry.  Shared between them is a hatred of Jews, Reaganite Conservatives (they call neocons) and biblical morality if it has any influence on society.  Both useful idiocies are being used to demand a new order, a restructuring, the removal of what they say is oppression.

The end result will be the annihilation of both groups of useful idiots by those that orchestrated this uprising for purposes the useful idiots refuse to allow themselves to see, or because they are too woefully ignorant to see it.

Look at Egypt as a recent example of what I’m talking about.  The Coptics stood shoulder to shoulder with the Muslims.  They were warned that the Muslim Brotherhood was behind the movement against Mubarak with helpful instigation by William Ayers and the Anti-War Marxists who installed Obama to the presidency.  Some of us warned against the support of the uprising in Egypt against a secular despot – because much worse would fill the vacuum.  We were denounced as supporters of a U.S. supported despot, guilty of his crimes as if we did them ourselves.  We warned them that what they would empower would be worse than what they suffered under for decades.  They responded with pictures of Coptic Christians standing with Muslims against the Mubarak regime and cited as proof our warnings that militant Jihadists were going to take over Egypt were unfounded.  They insisted that real liberty was coming to Egypt.  As we warned,  The Coptics there enabled and empowered the Islamic tyranny that is going to exterminate them.  And that persecution and extermination is now underway.

Same is true here.  The End the Fed Ron Paul supporters who cheer the Days of Rage protests in the US, are the Coptics of Egypt – who in their useful idiocy – are empowering the very movement that will ultimately turn on and exterminate them, along with the rest of us.  The frightening truth I fear is that a good chunk of the Ron Paul supporters hate as much or more than the overt Leftists do, those of us they will blame.

Dewey From Detroit posits an expanded thought process on these Marxist mobs rampaging in major cities.  His warnings are the same as mine, without the history lesson:

The OWS Crowd Gets Tough

We have a pack of economic imbeciles,  orchestrated by community organizers and union-mob bosses, who have gone on holiday to set up camp and get in people’s faces in order to rage against unfairness and corporations….

…If you still don’t believe that the Marxist/socialists have had their eyes on America as their prize for a long, long time, you’ve either not been paying attention or you’re one of the progressive sheeple “occupying” Wall Street who thinks you just dreamed up the socialist nirvana of America without borders and corporations all on your own. Or, worse yet, you are one of the titans of Wall Street who donated a gazillion dollars to “Organizing for Obama” to elect this posse of Stalinist morons.