Judgement Begins At The House of God 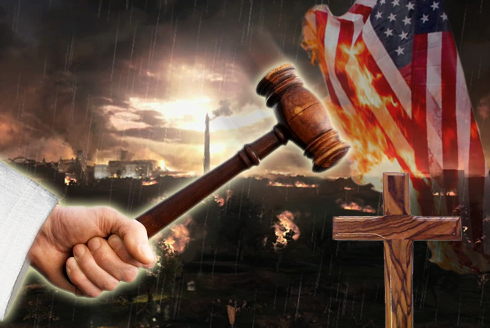 An unrepentant generation consigns us to our fate due to the silence and unwillingness of the Christian Church in America to live what it preaches.

In light of the continuing collapse of America into tyranny, the blame gets pinned on whatever politician, political party, lobbying group or Federal agency and even whatever international cabal is convenient.  The truth of the matter is that the root cause of our nation’s woes, is the Christian church in America going lukewarm.  Liberty and freedom as we know it, can only exist within the bosom of a moral and religious people.  As John Adams said – our Constitution is wholly inadequate to govern any other kind of people.

America in 2012 is a II Timothy 3 Generation.  The church in America and the culture it lost has devolved into that described generation over many decades.  But now it is here, and in full.

But understand this, that in the last days there will come times of great trial.  For people will be lovers of self, lovers of money, proud, arrogant, abusive, disobedient to their parents, ungrateful, unholy, heartless, unappeasable, slanderous, without self-control, brutal, hating  good, treacherous, reckless, swollen with conceit, lovers of pleasure rather than lovers of God, having the form of religion, but denying its power. Avoid such people.

For among them are those who creep into households and capture weak women, burdened with sins and led astray by various passions, always learning and never able to arrive at a knowledge of the truth. – II Timothy 3: 1-7

In my experience there is no better evidence of this than in the churches themselves.  Is not the current popular Christian doctrinal culture one of accommodation with sin?  To tell people that ‘Jesus loves them just as they are’? That it’s all about love and not judging sin, even when sin defines people?  The church in America has the form of religion – but no power to influence even it’s own members to avoid sin and to stand for Righteousness.  Indeed even in the churches, the people only want to hear smooth and easy things, and they get angry when their health/wealth Warren/Osteeen illusion of what Christianity is supposed to be, is challenged with the light of the plain truth whereby Jesus said in John , ‘If you love Me, keep My Commandments’.  So as a result the church itself no longer practices judgment against sin, because the church itself bought the lie from the Secular Left  that to judge sin, is to judge someone who practices and justifies it.  So in the striving against being judgmental, we have homosexual marriages IN the apostate Christian church, masquerading as righteousness.

For they are a rebellious people, lying children, children unwilling to hear the instruction of the LORD;  who say to the seers, “Do not see,” and to the prophets, “Do not prophesy to us what is right; speak to us smooth things, prophesy illusions, leave the way, turn aside from the path, let us hear no more about the Holy One of Israel.”  Isaiah 30:9-11

Truly the wicked in America are vehement in demanding to hear no utterance of biblical faith as the flap over Chick Fil-A last month testifies.

Michael Boldea of Helping Hand Ministries has two powerful writings I want to share with my readers.  The first is a “letter” from this II Timothy 3 Generation I am speaking about.  The second, is the indictment of the church, that all of us as Christians must bear the responsibility and the shame that go with where the church has arrived in America.

Letter From an Unrepentant Generation

Dear Jesus,
Sorry for not talking in such a long a time, but Your love being compulsory, You’ll just have to understand. We the people of planet earth have gotten together and have agreed upon some things, which we thought fitting to pass along.

We think it only right we have a say, and even if You disagree, we demand it, and as such You have to do it.

First off, we believe there has been some sort of miscommunication, because a handful of your representatives still seem to think we are in need of forgiveness, and keep throwing around words like repentance, self-denial, and self-renunciation. We are not looking for forgiveness since forgiveness implies wrongdoing, what we are looking for from You is validation more than anything.

We don’t believe we’ve done anything wrong since sin is relative and subject to individual interpretation. As such, we no longer believe in the existence of sin, or consequence, justice, or hell for that matter.
Just tell us we’re okay and heaven-bound no matter what we do and no matter what we allow to nest in our hearts, and we can continue having as amicable a coexistence as we have enjoyed thus far.

Since certain things in Your Book were offensive to us, we decided to change the parts we didn’t like. At first we thought you might disapprove, but what You have to understand is that by changing a few things, and tweaking a few others, coming to church has become attractive to more people, and this translates into more revenue. In the end, isn’t revenue what it’s all about? Trust us, we know business, and keeping the Book the way it was, was cutting into the bottom line. Make people feel at ease, make them feel comfortable, do not challenge their lifestyle, and you’ll have faithful and loyal givers that will put you over the top with every offering.

Since you’ve likely seen what is happening on this planet, we were also wondering why you were late in returning. What’s keeping you? By our estimation You should have been here by now, and we should all be in heaven feasting and attending a wedding…at least that’s what our guest speaker said last Sunday.

Need we remind you this isn’t what we signed up for? The Apostles of old, and those of the primary church might have been foolish enough to sign on the dotted line, but we read the fine print, and made our own amendments before signing. We hope you honor those amendments, even though we didn’t run them by you.

So just to set the record straight, our amendments include but are not limited to, no persecution, no hardship, and no tribulation. We’ve all agreed we don’t have what it takes to endure to the end, so please come sooner than you’d intended, just to make sure we’re not scarred – emotionally or otherwise – by what we’re starting to see taking shape all around us.  Although we do not intend any offense, we are firm concerning the aforementioned issues, and even most preachers, evangelists, and pastors agree with us on our points.

I have come to loathe these tired clichés

I have come to loathe these tired clichés we Christians are starting to throw around. ‘It’s time to stand for righteousness.’Really, is it? Has there ever been a time when it wasn’t the right time to stand for righteousness? Did it suddenly become the appropriate time to live the gospel, and not just talk about it?
Jesus didn’t say, ‘if you love, Me, tell Me so repeatedly, sing it to Me, put it on a t-shirt, or tweet My name ten times per day.’What Jesus did say, was, ‘if you love Me, keep My commandments.’
The new crop of the stupid and the perverse we are seeing come into their own, is the byproduct of the church’s silence, and unwillingness to live the gospel it preaches.
Sorry to break the news, but a good three quarters of ourspiritual betters don’t have a leg to stand on when it comes to sin, lawlessness, or other forms of rebellion against God.
You can’t really become a dyed in the wool moralist when you’re on your fourth marriage, being investigated for fraud and embezzlement, and the words righteousness and holinesshaven’t passed your lips in at least a decade.
Just this morning, another mega-church pastor was fired from his post for having an illicit affair with a sixteen year old parishioner.
The world is evil…the word of God tells us that it will be. The germane issue here is that the church isn’t the beacon of righteousness and holiness that it ought to be. It is not what God calls it, and even demands that it be, and so at best we’re just a bunch of blowhards pointing at the world’s perversions with one hand while trying to sweep our own sins under the rug with the other.
This is largely the reason judgment begins in the house of God. He hates hypocrisy, loathes it even, and when His righteous judgment begins to descend, the first stop on its world tour is the household of faith, where it will thoroughly clean house in a very public, very dramatic, and very complete way.
I’m sorry to burst a bubble or two, but sin isn’t what we define as being sin, sin is what God defines as being sin, and by God’s definition, much of the church needs to first repent before a living and omniscient God, before they begin the herculean task of converting the world.
What made the Apostles so effective in their ministry was not their vast intelligence, their witty repartee, their skills in delivering engaging exegesis, or their mastery of hermeneutics. What made the Apostles so effective was that they lived the gospel they preached, and because they lived the gospel, signs and wonders followed them, and when they opened their mouths to speak the name Jesus, they did so with authority and power.
Man is no more evil today than he was two thousand years ago. The only difference between now and then is that the watchmen have stopped watching, the guardians have stopped guarding, and those who ought to have been lights, and who ought to have stood for truth, discovered the hugely entertaining and mildly addictive game of golf.
We can keep thinking we can wish the world into being a better place, or positively affirm that it’s not as bad as all indicators confirm it is, but the reality of the situation is that change begins with us – with the individual – and as long as we are duplicitous of heart, and only partially committed to truth, the enemy will continue to gain ground and conquer territories the household of faith should have held with little effort.
The persecution that is soon to descend upon the church is not only beneficial in that it will separate the wheat from the chaff, it is vitally necessary, deserved, and long overdue.
With love in Christ,
Michael Boldea Jr.

This author, having seen and experienced institutionalized persecution in a third world nation for the first half of this year – recognizes the very machinations for the same kinds of persecution happening here as it exists over there that Michael sees as soon-coming.

America will not survive, nor liberty endure tyranny when the church itself – the bosom of liberty has gone lukewarm.  Lukewarm will grow cold and then dead.  Because iniquity abounds, the love of many will grow cold, and then many will be offended, betray one another and you will be put to death for His Name’s Sake. (Matthew 24).

4 responses to “Judgement Begins At The House of God”