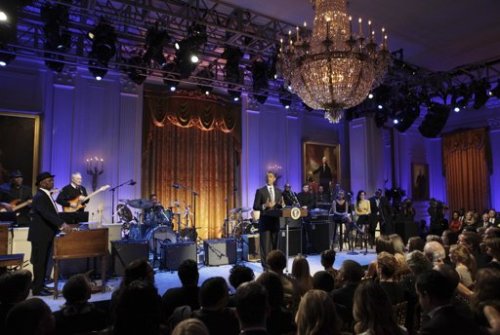 North Korea and China prepare to go Nuclear with allies in Tehran, Obama shuts down combat ready air wings but parties and sings with Justin Timberlake at lavish concert party at White House – all on taxpayer dime.

Our enemies in the world have to be laughing their arses off at the USA for putting up with this in-our-face clown for president.  While North Korea is sending signals of war – NUCLEAR WAR at that (with China massing troops to bolster their Communist ally), Obama play politics and makes good on his plan to ‘make sequester as painful as possible’, by GROUNDING nearly 2/3 of America’s air combat wings.  Of importance to note is that this ‘Sequester’ of Obama’s is NOT about cutting any federal spending, but rather a reduction in the RATE INCREASE slotted for the future.

So while the world prepares for war and Obama gives millions of dollars of military hardware to the Muslim Brotherhood in Egypt while working to arm Al Qaeda in Syria, His Heinous effectively shuts down our air defense capability.  Then to rub salt in the wound he gives American taxpayers the finger while tossing a lavish ‘Blues Concert’ at the White House for himself and family – all on your dime.  While the media masturbates to their fist king, Hollywierd worships their messiah, while the world is getting ready to burn.

Singing with Justin Timberlake apparently scores higher in the minds of Obama’s imbecillic drones than protecting the country while the world readies for yet another global conflict – to the gross and willful ignorance of The Won, and his army of MarxoFascists working to gut the country  and render it into oblivion.

No dimes for combat air wings, but plenty of dimes to entertain America’s first emperor.

Caligula won’t be able to hold a candle to Obama the way this is going.