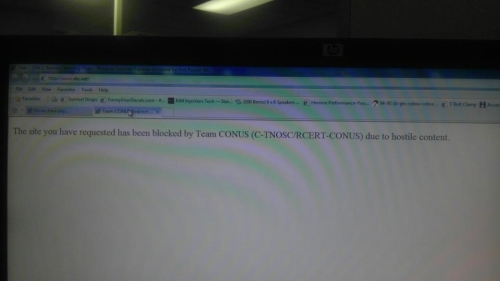 The patterns are becoming more prevalent, more openly hostile and deliberate in the ostracization, demonization and eventual eradication of Christianity from not only the public square in America – but now also from our military.  In the last few months, stories have emerged of a deliberate effort by Obama officials and the Pentagon to classify Christians as domestic terrorists, extremists “Like Al Qaeda” and a direct threat to the security of the country.  The military has been instructed to restrict or remove Christian exercise from within it’s authority, while pandering to Islamic sensibilities.

Institutionalized persecution is already being practiced at large in America and being set as policy.  But most Americans refuse to believe it is happening, and assume the kinds of criminalization and persecution of Christians elsewhere in the world endure, cannot happen here.

Well I have news for such misguided brethren;  you hold to a lie, for Jesus told us in Matthew 24 what Christians would suffer for His Name’s sake.  Our Hedge of protection is coming down.  And no wonder – a nation whose Believers sat on their hands while The Lord was driven from society and both infanticide and homosexual aberration was asserted to be preferential, is not a nation God will continue to protect.

The U.S. Military has blocked access to the Southern Baptist Convention’s website on an unknown number of military bases because it contains “hostile content” — just weeks after an Army briefing labeled Evangelical Christians and Roman Catholics as examples of religious extremism, Fox News has learned.

The AFA sent out an action alert urging its members to contact the Pentagon and ask them to “stop the military’s alarming trend of hostility towards faith and religious freedom in our military.”

“Most disturbing to him (the Army officer) was the fact that the military labeled his personal religious faith as ‘hostile’ to the U.S. Army,” AFA spokesman Randy Sharp told Fox News.

Ron Crews, executive director of the Chaplain Alliance for Religious Liberty, told Fox News that Southern Baptist chaplains on military bases around the nation have been unable to access the website.

“It’s a concern for the Dept. of Defense to block the website of one of the major evangelical denominations in the country,” Crews told Fox News. “The Southern Baptist Convention has the largest number of chaplains in the military representing Southern Baptist soldiers and churches. Those chaplains need access to their denomination’s website.”

An Army Reservist contacted Fox News and said he tried to log onto the site and an “Access Denied” message appeared on the screen.

“You request was categorized by Blue Coat Web Filter as ‘Religion,’” the message read.

Richard Land, president of the SBC’s Ethics and Religious Liberty Commission denounced the censorship and demanded that Southern Baptist soldiers be provided access to the site.

“This is outrageous,” Land told Fox News. “Southern Baptists make up a higher percentage of the all-volunteer military than in the general population. It’s outrageous that our website would be blocked for Southern Baptists serving in the military and defending the freedom to access websites.”

Land said the military censorship was part of a “disturbing trend.”

Despite the denials of censorship, the military of late, following directives from the Obama regime, has become increasingly hostile to Christianity, regarding Christians as ‘hostile’ and a domestic threat to security.  In the last two months – not only has the Army listed Christians and many Americans as ‘Domestic Hate Groups’, but has engaged in restricting Christian exercise and removal of Christian and Jewish crosses and menorahs from Army worship areas.

The Army removes crosses from an Army chapel in Afghanistan that offends Muslims, a training instructor lists evangelical Christianity and Catholicism as examples of religious extremism.

We are also told a cross on a chapel at an Army base is offensive to Muslims.

Tolerance, it seems, is a one-way street.

The Army does require chapels to be religiously neutral, but some suspect this is not why the crosses and steeple were removed. “My personal feeling is that it is a direct attack against Christianity and Judaism,” one soldier told Fox News. “When you look at the regulation and you notice the four items directly quoted are crosses, crucifixes, the Star of David and the menorah.”

Another incident here at home, reported by Fox News Radio’s Todd Starnes, raises the question of whether the Army and the Pentagon are being neutral toward religion or increasingly hostile to it.

Earlier this month, it was discovered that the military leadership has listed Evangelical Christians as a “Domestic Hate Group” and the number one threat to the security of the country.  NOT Al Qaeda, not Jihadists – but Evangelical Christians as THE number ONE threat.  The following a a slide from a presentation given to U.S.military troops on the threat of ‘religious extremism: 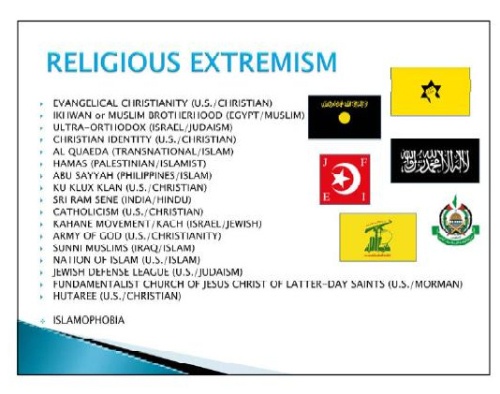 The latest scandal to hit the Obama administration and its handling of the military surrounds a so-called “Equal Opportunity” training course presented to U.S. Army Reserve forces in Pennsylvania. During the presentation, troops were subjected to a slideshow that included a segment on what was dubbed “religious extremism.” At the top of the list — the very first item — was “evangelical Christianity” in the United States. Also included were “ultra-Orthodox” Jews, Catholicism, fundamentalist Mormons, and “Islamophobia.”

Between evangelical Christians and orthodox Jews was the Muslim Brotherhood, a radical Islamo-socialist group ruling over Egypt that Obama is supplying with advanced military weaponry including fighter jets and tanks — not to mention billions more in aid. Along with the Brotherhood, al-Qaeda, the Nation of Islam, a Filipino Islamist group, and Hamas were listed, along with Sunni Muslims in general. The U.S. government claims to be at war with some of the Islamist groups, while others are openly receivingAmerican taxpayer dollars, weapons, and training from the administration.

The following is an email written by a lieutenant colonel at Fort Campbell in Kentucky — advising three dozen subordinates to be on the lookout for soldiers who might be members of “domestic hate groups.”

Many events have been taking place across the country – just want to ensure everyone is somewhat educated on some of the groups out there that do not share our Army Values.

When we see behaviors that are inconsistent with Army Values – don’t just walk by – do the right thing and address the concern before it becomes a problem.

We need to make sure that we maintain our standards – starting with reception and integration.

(U) Opposition to equal rights for gays and lesbians has been a central theme of Christian Right organizing and fundraising for the past three decades ? a period that parallels the fundamentalist movement’s rise to political power.

(U) For Christian Right leaders, the gay rights movement and its so-called “homosexual agenda” are the prime culprits in the destruction of American society and culture. In the words of Focus on the Family founder James Dobson; the battle against gay rights is essentially a “second civil war” to put control of the U.S. government in the right hands, meaning those who reject gay rights.

(U) The religious right in America has employed a variety of strategies in its efforts to beat back the increasingly confident gay rights movement. One of those has been defamation. Many of its leaders have engaged in the crudest type of name-calling, describing LGBT people as “perverts” with “filthy habits” who seek to snatch the children of straight parents and “convert” them to gay sex. They have disseminated disparaging “facts” about gays that are simply untrue ? assertions that are remarkably reminiscent of the way white intellectuals and scientists once wrote about the “bestial” black man and his supposedly threatening sexuality.

(U) Anti-immigrant hate groups are the most extreme of the hundreds of nativist and vigilante groups that have proliferated since the late 1990s, when anti-immigration xenophobia began to rise to levels not seen in the United States since the 1920s.

(U) Anti-Muslim hate groups are a relatively new phenomenon in the United States, most of them appearing in the aftermath of the World Trade Center terrorist attacks on Sept. 11, 2001. Earlier anti-Muslim groups tended to be religious in orientation and disputed Islam’s status as a respectable religion.

(U) These groups also typically hold conspiratorial views regarding the inherent danger to America posed by its Muslim-American community. Muslims are depicted as a fifth column intent on undermining and eventually replacing American democracy and Western civilization with Islamic despotism. Anti-Muslim hate groups allege that Muslims are trying to subvert the rule of law by imposing on Americans their own Islamic legal system, Shariah law.

(U) The antigovernment Patriot movement has experienced resurgence, growing quickly since 2008, when President Obama was elected to office. Factors fueling the antigovernment movement in recent years include changing demographics driven by immigration, the struggling economy and the election of the first African-American president.

(U) In 2012, the Southern Poverty Law Center identified 1,274 anti-government ?Patriot? groups that were active the prior year. Of these groups, 334 were militias and the remainder includes ?common-law? courts, publishers, ministries and citizens? groups.

After they have finished demonizing evangelical Christians, what will the next step be?

A U.S. Army Reserve equal opportunity training presentation entitled “Extremism and Extremist Organizations” actually included “Evangelical Christianity” as an example of “Religious Extremism” in a list that also included al-Qaeda, Hamas and the Ku Klux Klan.  You can find a copy of the entire presentation right here.

Since Barack Obama was first elected, Christians have been demonized in government report after government report.  In a previous article entitled “Patriots And Christians Have Been Repeatedly Labeled As Potential Terrorists Since Obama Became President” I detailed many of these instances.

But of course it is not just the government that is demonizing Christians these days.