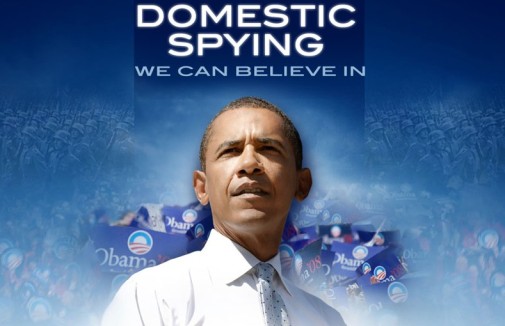 A vast overwhelming network of domestic spying by the Obama Regime collects data on everything you do or say in life.

Drones deployed that can see and listen to you from 17,000 feet up.  An NSA database of your phone records, financial transactions, web browsing history.  An IRS used to punish Obama’s opponents, sporting a massive database of your financial records, and will by next year, have a database of all your medical records.

Obama’s regime has put in place and built upon what was started under previous Administrations, a government surveillance monster that will ensure that everything you do, everything you say, everything you purchase, every place you go on the internet, and everything about you from your diet to your whereabouts is known, catalogued, databased and available for any action the Federal Government decides to take. Why just now, Breitbart is reporting that the NSA is targeting your credit card use.

While for many the news this week of government spying on Americans is shocking – those of us who know what Obama and his MarxoFascists are and what they are doing – knew months ago that some kind of massive nefarious spy program was going on under Obama.

Back in February – Maxine Waters: “Obama Has Secret Database Of Everything On Every Individual”

Now we know what she was referring to.  She knew back then, and probably much earlier than she let it slip, that Obama was installing a secret massive surveillance monster that would know everything there was to know about you.   This massive Soviet-inspired domestic spy apparatus targets average American citizens, not foreign Jihadists and foreign enemies as the media is attempting to tell us.  An apparatus that indeed, will have information about everything on every individual.  What you read, what you buy, what you believe, what you own, what you eat and what your medical condition is.   Information that can be used against you for any reason the government deems necessary at any time.

Or as we saw with the IRS Scandal, PUNISH you.

That means you.  That means me.  Waters and her Politburo Comrades in D.C. have known full well about this domestic spy apparatus.  In fact GOP Judenrat’s Lindsey Graham and John McCain support the NSA and Obama’s domestic data trove.  Perhaps this is why John Boehner and Mitch McConnell act as silent co-conspirators in this MarxoFascist Coup?   They remain silent while Obama and his cronies are perpetrating  one violation of the Constitution and our rights after another with little to no outrage or condemnation.

Meanwhile the state grows ever bigger, more menacing, more entrenched and more determined to make everyone in America a criminal it can act against as it sees need.

This is how it was in the Soviet Union for the average Russian.  They were automatically guilty of something, and all the info the Soviet State had on the individual could be used as evidence in a case to make that person ‘go away’.

Don’t think that cannot happen here, because it already IS happening here, right in front of you.  But like the Jews in 1930’s Europe, many simply refuse to believe this can possibly be happening.

What I find hilarious is the fact that the very cretins who were excoriating George Bush for the NSA wiretaps of FOREIGN phone calls coming INTO the USA from known Jihadists, who were even calling for his impeachment over that – are today applauding even worse.  What Bush had done was to LIMIT the wiretaps to specific criteria dealing with FOREIGN terrorists.  Obama’s NSA targets every American citizen WHILE absolving known Jihadists.

On December 16, 2005, The New York Times ran a front-page story revealing that the Bush administration, since shortly after 9/11, had been allowing the National Security Agency (NSA) to wiretap — without seeking a court warrant — phone calls involving U.S. residents, provided that in each case: (a) at least one party to the call was situated overseas, and (b) the American was a known contact of a terrorist organization.

So these creeps who stood and decried that action, threatening impeachment, are today telling us to “calm down” over revelations Obama is spying on everything we do, because this is not new.  Well that is a lie – IT IS NEW, because what Obama has done is to direct the NSA to WIRETAP ALL AMERICAN CITIZENS.  And not just phone calls, but everything we do online, everything we purchase and anything we write or donate to.

And the Ruling Class Statists who hated Bush because he was not a MarxoFascist – are today applauding and defending what Obama has done.

Which is to turn America into a giant gulag.

The National Security Agency’s monitoring of Americans includes customer records from the three major phone networks as well as emails and Web searches, and the agency also has cataloged credit-card transactions, said people familiar with the agency’s activities.

The disclosure this week of an order by a secret U.S. court for Verizon Communications Inc.’s phone records set off the latest public discussion of the program. But people familiar with the NSA’s operations said the initiative also encompasses phone-call data from AT&T Inc. and Sprint Nextel Corp., records from Internet-service providers and purchase information from credit-card providers.

…Meanwhile, the Obama administration acknowledged Thursday a secret NSA program dubbed Prism, which a senior administration official said targets only foreigners and was authorized under U.S. surveillance law. The Washington Post and the Guardian reported earlier Thursday the existence of the previously undisclosed program, which was described as providing the NSA and FBI direct access to server systems operated by tech companies that includeGoogle Inc.,  Apple Inc., Facebook Inc., Yahoo Inc., Microsoft Corp. and Skype. The newspapers, citing what they said was an internal NSA document, said the agencies received the contents of emails, file transfers and live chats of the companies’ customers as part of their surveillance activities of foreigners whose activity online is routed through the U.S. The companies mentioned denied knowledge or participation in the program.

It couldn’t be determined if any of the Internet or credit-card arrangements are ongoing, as are the phone company efforts, or one-shot collection efforts. The credit-card firms, phone companies and NSA declined to comment for this article.