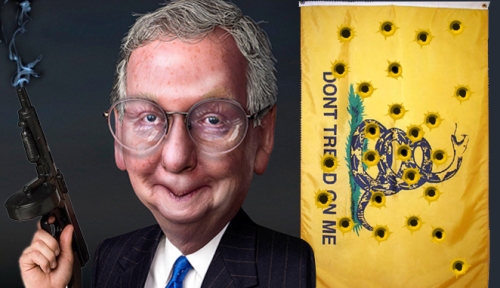 McConnell’s vitriol against Opponent Matt Bevin showcases that The GOP Leader’s guns are only primed for Conservatives, doing the dirty work for Obama and the Democrats.

Senate Minority Leader Mitch McConnell has been amazingly silent in Washington recently regarding all the various Administration scandals from Benghazi to the IRS targeting of Conservative groups to other divisive political issues the country is confronting from Amnesty to ObamaCare.

But Mitch McConnell is suddenly VERY vocal, and goes for the throat when it comes to any primary challengers or Conservatives that calls his leadership into question. In an incredible illustration of Jeckyll and Hyde, the Kentucky Ruling Class Establishment leader is resorting to constant trashing of his new primary opponent Matt Bevin as ‘not a Conservative’, but a ‘fraud’ in radio, mail and TV attack ads that air at seemingly at every commercial break.  The harsh accusations from McConnell against Bevin range from charges Bevin is a tax cheat, welfare recipient, swindler, carpet-bagger and a Conservative fraud”.  This is hilarious coming from one of the greatest Conservative frauds now in politics.

Along with John McCain, Eric Cantor and John Boehner – McConnell is a key part of the Establishment Triumvirate that sees Conservatives and Tea Party Americans as a nuisance at best, and a dangerous enemy at worst.  When it’s Primary time, they pretend to be Conservatives to win what used to be the Republican base, but once they are seated – they govern against Conservatives and side with or capitulate to the Obama/Liberal Democrat agenda nine times out of ten.  That is McConnell’s record of failed leadership.

Scripture tells us ‘Wherefore by their fruits you shall know them’. Matthew 7:20

The fruits of Mitch McConnell proves that he’s all political rhetoric, while his actions and those of the entire Ruling Class GOP Judenrat leadership, prove they are no friends of Conservative Americans (Witness John McCain suggesting he might vote for Hillary Clinton in 2016 if Tea Party Conservative Rand Paul is the GOP nominee).  They will attack and smear Conservatives in ways they NEVER publicly attack the anti-America agenda of Obama and the MarxoFascist Democrats.   They do so only in the polite company of rabid supporters and then go back to Washington to work hand-in-hand with Obama.

The facts are that the GOP leadership under McConnell, Cantor and Boehner have accommodated Obama’s agenda while they sat silent in the face of the NSA/IRS and Benghazi scandals.   They surrendered their opposition with Harry Reid’s Rules change ‘nuclear option’ threat – giving Obama and the Democrats EVERYTHING they wanted.   They continually run interference for Obama and hamstrung several committees looking into those criminal issues and have been mum to the press and public about them.  But comes a primary with a Conservative to challenge their failed leadership – then the big guns that sat silent in holsters while Obama and the Democrats rape the Constitution, suddenly come out firing and the war cries to the death are hurled.

The Ruling Class GOP leadership demonstrates it is fully-capable of standing in opposition to those things it hates – and what the fruits show us all, is that they are silent in opposition to Obama, but vitriolic in their battles against Conservatives who do not lick their palms, or sit silent or capitulate to the agenda that is subjugating liberty into tyranny.  In fact, I believe McConnell and the GOP leadership hate and disdain Tea Party/Reagan Conservatives as much as Obama and his MarxoFascists do.  We see it daily, the glee from Democrats to have the GOP leadership go to war for them against their common foe in Conservatism.

The fruits of this fact are self-evident in the war Mitch McConnell is waging against primary challenger Matt Bevin.  Never have I witnessed such intense opposition and efforts to tear down a man from within his own party, than what I am reading, watching and hearing from Mitch McConnell’s campaign for re-election.  Worst of all, McConnell has to LIE in order to sell the illusion that HE IS THE REAL CONSERVATIVE.

Even the liberal Washington com-Post had some fact-check digging of McConnell’s claims against Bevin and awarded McConnell’s attacks on Bevin three out of four Pinocchio’s for nasal stretching of the truth:

Labeling McConnell’s rival as “Bailout Bevin” — complete with a Web site called bailoutbevin.com — is especially misleading, given the ad does not point to any long history by Matt Bevin of accepting state or federal assistance. This grant — a more accurate term — is specifically tied to maintaining job growth and is aimed at small businesses, and was received after a significant setback.

Although the ad highlights the company’s failure to pay taxes on time, the East Hampton tax liens highlighted in the ad were actually paid in full before the grant was issued.

The image portrayed in the ad is that Bevin gets “bailouts” while skipping out on his taxes. The reality is that, after financial success, he became involved in a small family business with historic roots in the community and had started to get the company back on its feet when tragedy struck. Rather than throw in the towel, he decided to try to rebuild the business, with some state aid.

Ordinarily, one would think McConnell would celebrate such gumption by a small business owner.

Where is this kind of passionate opposition from McConnell against Obama, or the Democrat agenda, or ObamaCare? The efforts Obama and the Congress attempted to strip us of our Second Amendment Rights?

Conservatives in the House passed H.R.3409, the Stop the War on Coal Act, even with the help of some Democrats.  McConnell did NOTHING to help push that bill or its provisions to the Senate floor and fight for it.  McConnell has done nothing to stop the EPA’s ridiculous oversights or to reign in those rogue agencies – rather he surrendered any opposition to Obama’s radical picks for agencies like the EPA and labor board when Harry Reid threatened to change the Senate rules.

McConnell doesn’t put his money where his mouth is.  Instead of running ads every ten minutes against another Conservative, perhaps it would have been wiser to run them against Obama’s agenda?

Nah…. They have a “civil process” in the Senate that apparently doesn’t allow negative attack ads against Democrats or Obama

Another example of all mouth – no substance –

McConnell keeps insisting he “Has worked to oppose ObamaCare every step of the way”.  He just said that this past weekend at a political Picnic in Western Kentucky.

But that claim is absolute garbage – a total twist on the truth and reality.  He says one thing for the cameras, and works behind the scenes to do the exact opposite, even INTIMIDATING other Senators to drop Conservative positions in order to advance Obama’s agenda:

Sen. McConnell is quick to tell us that he has checked every box on the “oppose Obamacare” checklist. He has held plenty of press conferences declaring his opposition to Obamacare. But behind the scenes he has done everything in his power to stymie any real chance at eliminating the biggest expansion of government in modern history.

…Utah Senator Mike Lee is leading an effort to defund Obamacare as part of negotiations over the government’s funding bills for the upcoming fiscal year, which begins October 1, 2013. Senator Lee has issued a letter, signed by 13 of his colleagues, declaring:

Utah Senator Mike Lee is leading an effort to defund Obamacare as part of negotiations over the government’s funding bills for the upcoming fiscal year, which begins October 1, 2013. Senator Lee has issued a letter, signed by 13 of his colleagues, declaring:

We view the Obama Administration’s recent decision to delay Obamacare’s employer mandate and eligibility verification for the individual exchanges as further proof the law is a failure that will inevitably hurt businesses, American families, and the economy.

In light of this admission, we believe the only way to avert disaster is to fully repeal Obamacare and start over with a more sensible, practical approach to reforming our healthcare system.

However, if Democrats will not agree with Republicans that Obamacare must be repealed, perhaps they can at least agree with the president that the law cannot be implemented as written.  If the administration will not enforce the law as written, then the American people should not be forced to fund it.

Not only has Sen. McConnell refused to sign this letter, he is twisting arms behind the scenes, convincing senators to remove their signatures from Sen. Lee’s letter. To date, five senators have fallen prey to Sen. McConnell’s intimidation tactics.

So while McConnell is out there on the campaign trail shouting “I opposed ObamaCare every step of the way” – it turns out that the truth is – he is sabotaging the last-chance effort we have to stop ObamaCare before it is implemented.  Even going so far as to intimidate other Senators to remove their support from the effort to stop and defund ObamaCare.

In Fact, McConnell’s position on ObamaCare is what John Boehner’s position is: go along with it.  Listen to what GOP Rep Robert Pittenger said over the weekend in North Carolina when asked about defunding ObamaCare:

That is the official GOP Ruling Class position on stopping and defunding ObamaCare: NO.

McConnell is part of the Ruling Class Oligarchy that MUST be run out of D.C. if Liberty has any chance of surviving.  McConnell is absolutely no Conservative – you can see those fruits by the war he is waging on Conservatives like Matt Bevin and his record of capitulation in Washington.