Fascism – A Progressive Construct: From The French Revolution To Obama’s Age of Tyranny 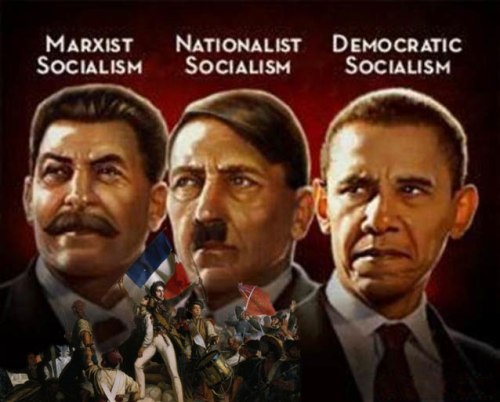 History reveals Satan’s fingerprints on the ideology that spawned the worst miseries and genocides in modern history.  Obama and the Democrats in America are imposing upon us, a similar fate.

One of the two greatest lies that most Americans have bought lock-stock and barrel from decades of liberal Left indoctrination is that 1.) Our Rights come from government which is the greatest good; and 2.) That European Fascism and Hitler’s Nazi’s were a product of Right Wing Christian Conservative Nationalism.

Nothing could be further from the truth, and the Left has always known this which is why they worked so hard to achieve success in the minds of easily deceived Americans that Fascism is a Conservative/Right/Christian ideology.  The meme that “fascism will come carrying a cross and wrapped in the flag” is the fear and loathing the Leftists have for Christian Conservatives, and it was convenient for them to convince as many as possible that liberty has nothing to fear from the Progressive Left, but rather from the Conservative Christian.

The abject truth of the matter is that Fascism along with Nazism and Marxism are bastard sons of Socialism, which is not a Conservative/Right wing ideology.  Rather, they emanate from the top-down controlling aspect that Statists of Socialism and Communism demand.

What Obama and his MarxoFascist Democrats are fundamentally transforming America into, is a Fascist totalitarian state that ensconces the Ruling Class into a position of power that micromanages every single aspect of our lives. How we live, what we think, what we eat, what we learn and teach, to what kind of health care we will be allowed to have is all part of the agenda to subjugate liberty to Statism.  Do not marvel at the charge, for this is what the Progressives have sought to do to this country for a century.

The fingerprints of such tyranny stretch back to antiquity – but the modern strain of Satan’s imprint on man’s government are found squarely in those who in name of ‘fairness’, ‘compassion’, ‘equity’ and ‘common salvation’ impose their tyranny and rule their subjects with an iron fist – exterminating any and all who stand in their way.

French Revolution and the triumph of Liberal Fascism

For the progressive left, all roads lead to the French Revolution (1789-99) which was the first totalitarian revolution, the genesis of modern totalitarianism, and the spiritual foundation for the Russian Communist, Italian Fascist and German Nazi revolutions. A nationalist-populist rebellion, it was established and controlled by a small intellectual braintrust hellbent on killing God, Christianity, capitalism and objective truth thus devolving Western civilization into a savage society based on a political religion that deified “the people,” anointed the revolutionary elites as their priests, and destroyed the rights of individuals. As Robespierre put it, “The people is [sic] always worth more than individuals… The people is sublime, but individuals are weak” – or collectively, dispensable.

In this case, I believe that American presidential history over the last 100 years has (or soon will) establish the Wilson, the FDR, the LBJ and the Obama administrations as the direct descendants of the world’s first fascist movement: the French Revolution.

Since history is the final judge of our deeds (JFK), it’s incredulous how any rational person today would doubt the fascist nature of the French Revolution. Few doubt that it was tyrannical, terrorist, nationalist, conspiratorial, and populist. It created the first modern dictators, Robespierre and Napoleon, and functioned on the foundation that the nation had to be ruled by a progressive avant-garde, a pagan oligarchy who would personify as the authentic, organic expression of the “general will” according to the political philosopher, Jean-Jacques Rousseau (1712-78). The fanatical Jacobin character made the revolutionaries more vicious and evil than the king they supplanted. Some fifty thousand people eventually were murdered in the Great Terror, a majority in political show trials that British historian Simon Schama defines as the “founding charter of totalitarian justice.” Robespierre summed up the totalitarian nihilism of the Revolution: “There are only two parties in France: the people and its enemies. We must exterminate those miserable villains who are eternally conspiring against the rights of man… [W]e must exterminate all our enemies.”

But what truly makes the French Revolution the first fascist revolution was its effort to turn politics into a religion. (In this the revolutionaries were inspired by Rousseau, whose concept of the general will divinized the people while rendering the person an afterthought). Accordingly, they declared war on Christianity, attempting to purge it from society and replace it with a “secular” faith whose tenets were synonymous with the Jacobin agenda. Hundreds of pagan-themed festivals were launched across the country celebrating Nation, Reason, Brotherhood, Liberty, and other abstractions in order to bathe the state and the general will in an aura of sanctity. As we shall see, the Nazis emulated the Jacobins in minute detail.

The American right and classical liberals embraced the American Revolution (1775-83), which was fundamentally conservative, while rejecting categorically the evil deeds and fanaticism of Jacobinism. However, if the French Revolution was fascist, then subsequent generations should have deduced that this diabolical movement rightly as the fruit of this poisoned tree and fascism and be relegated to its proper place in history as the genesis of political liberalism. This would lead to a major paradigm shift in the leftist worldview; therefore, liberals turned to the irrational and willingly embraced to cognitive dissonance and revisionist history rooted in pseudo-scientific ideas like Social Darwinism, scientism, scientific racism, evolution atheism and postmodernism.

Johann Gottfried von Herder (1744-1803), the infamous theologian, philosopher, poet and literary critic is perhaps unjustly credited with establishing the intellectual foundation for Nazism, borrowed heavily from Rousseau’s neo-pagan political arguments returning mankind back to his original savage state of nature and reformulated them into an existential cultural struggle (e.g., Kulturkampf of Otto von Bismarck [1871-78]). According to Herder, Rousseau’s “general will” was exclusive in each nation since its history, culture and traditions were unique to a particular Volk (people). This Romantic, nationalist worldview led different intellectuals and artists to champion the individuality or supremacy of races, nations, and cultures leading inexorably to scientific racism and race-based genocide against minority and religious groups.

Rousseau’s utopian society is not expressed by ethnicity or geography or tradition, nevertheless, Rousseau’s deification of the nation under the rule of the dominate State, his glorification of neo-pagan ideas led directly to the Golden Age of twentieth century tyrants (e.g., the Ottoman Turks, Lenin, Stalin, Mussolini, Hitler, Franco, Mao, Pol Pot, Iranian Ayatollahs, etc.) all who systematically implemented Rousseau’s savage utopia worldview as public policy leading to democide – the government sponsored deaths of people in the hundreds of millions – and that’s just in the twentieth century alone.

Rousseau’s ideals established by the general will and the dogmas of what he called a “civil religion” was controlled by the omnipotent God-state (e.g., Nietzsche’s “Will to Power” and “god is dead” philosophy). It’s effect meant that Jews, Christians, critical thinkers, intellectuals and people who rebelled against Rousseau’s collective community (spirit) of the society are forced outside the State and have no claim on its protections (e.g., Mussolini:Everything inside the State, nothing outside the State, nothing against the State). In reality, the pagan State is not only required to identify and guard against unsociable individuals or subcommunities (i.e., the church), it is mandated to eradicate them (e.g., Darwin’s natural selection, survival of the fittest, Galton’s eugenics, Hitler’s holocaust, abortion, etc.).

Fascism is indebted to the French Revolution in other ways as well. Robespierre appreciated, as did Sorel and his heirs, that violence was a linchpin that kept the masses committed to the ideas of the Revolution: “If the spring of popular government in time of peace is virtue, the springs of popular government in revolution are at once virtue and terror: virtue, without which terror is fatal; terror, without which virtue is powerless. Terror is nothing other than justice, prompt, severe, inflexible; it is therefore an emanation of virtue; it is not so much a special principle as it is a consequence of the general principle of democracy applied to our country’s most urgent needs.”

“For the first time in history,” proclaimed historian Marisa Linton, “terror became an official government policy, with the stated aim to use violence in order to achieve a higher political goal.” The paradox seemed lost on the Bolsheviks – self-proclaimed heirs of the French Revolution – who championed fascism, rather than their own method, as an “openly terroristic dictatorship.”

The usefulness of terror as a proven strategy to seize and maintain absolute power to the Jacobins as to modern day liberals, socialists and progressives was totalizing, but amid its dominant objectives was its penchant to preserve a permanent sense of crisis – Leon Trotsky (1879-1940) called it the “Perpetual Revolution.” Saul Alinsky (1909-72) and his acolytes Rahm Emmanuel, Hillary Clinton, Barack Obama and the Democratic Socialist Party use existential crisis which is historically identified as a central role of fascism because it ends debate and democratic discussions (e.g., “never allow a crisis to go to waste”). Therefore, all fascistic movements put forth considerable effort to extending a perpetual state of emergency – a perpetual revolution that never ends. Historically speaking, the French Revolution was the direct descendant of both World War I and II and in our present era has established the rise of radical Islam, thus spawning a new, globalist Age of Terror (9/11-present).