We Refuse To Comply With ObamaCare. We Will Resist Tyranny. 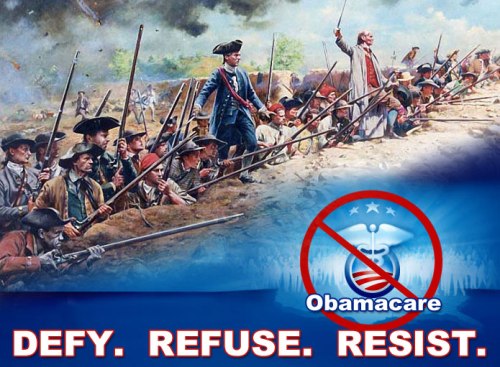 Most Americans oppose Obamacare by a large 70% margin.  Now a growing contingent of citizens are openly declaring their refusal to participate or comply with the demands Obamacare sets forth.

It was drafted in secret, behind closed doors.  It was sold as a freebie for the welfare class, and promised to lower everyone’s premiums.  It was promised you could keep your existing healthcare insurance and your doctors.

It was all a lie from the beginning.  ObamaCare is simply a tool and path towards a single-payer government-run and distributed healthcare system.  Obama himself said as much:

But the people were mesmerized by his skin color and his media lavished gravitas – and they did not comprehend his intent with those words.

When Obama’s signature piece of legislation was having trouble in Nancy Pelosi’s House – she asserted that they were just going to ‘deem the bill passed’ without even holding a vote.  When the vote finally came, it was done in the middle of the night, without a single Representative having read the 3,000 page monstrosity – not a single Republican voted for it.

We learned the IRS was being put in charge of enforcing ObamaCare and being given abilities most Communist regimes do not even have over their people’s bank accounts.  When the Individual Mandate was challenged in court Obama repeatedly asserted it was not a tax, but a penalty due the fact the legislation did not originate in the House and it was sold as not a tax increase.  Federal Judge Roger Vinson ruled that if the insurance mandate is a penalty, not a tax, it must be defended under the Commerce Clause and not Congress’s taxing authority.

But once it got to the Supreme Court – Obama suddenly insisted the Individual Mandate was a tax, after spending months insisting it was not a tax, but a penalty and Justice Roberts – suddenly changed his views and rewrote the law from his bench to give it  convoluted legal standing.

Since that time  Obama decided to rewrite his own law, by himself without any authority to do so, and give exemptions to his cronies and supporters from having to be subject to his law.  He then decreed that he was delaying the requirement for employers to provide mandated and classified affordable health insurance starting Jan. 1, 2014, or pay huge fines.

Sen. Max Baucus (D-Mont.) the Democrat who helped write the demonic bill himself declared that implementing Obamacare “is a huge train wreck”.

ObamaCare is worse than a disaster – it is the implementation of tyranny and the usurpation of our Rights to a government that now has the precedent to tell us what we must purchase, how much we must purchase and at what price – or face penalty. It tells private companies they must pay for risks that will eradicate their profitability.  It destroys one of the best health care system in the world.

That is tyranny – and many Americans like myself are declaring their refusal to comply with ObamaCare.

One such blogger lays it all out and declares her refusal to comply.  God bless her.   Where I am not sure she is accurate is in ascribing criminal IRS income tax penalties to violators of Obamacare. That is a very murky area at the moment. Though one has to wonder why it is Obama chose the IRS to administer compliance if it isn’t for their ability to seize bank accounts, property and levy prison time.

So Kudos to Daisy Luther.  We stand with her here.  Defy.  Refuse.  Resist.

BRING IT ON: I WILL NOT COMPLY WITH OBAMACARE

I will not comply with Obamacare.

There. I said it.

I am unequivocally not going to be complying with Obamacare.

I also won’t be purchasing health insurance at 4 times the regular price, nor will I participate in the government-funded “exchange” for “affordable” healthcare.

Now, first, let me be clear – this isn’t because I’d be paying $20,000 per year for the crappiest coverage. In reality, Obamacare and the subsidies my family is eligible for would make the cost incredibly reasonable – but that is not the point.

When I moved back home to America after living in Canada, I never expected to be subjected to government coercion on this grand scale. I will not comply. The government is fond of saying that they will not negotiate with terrorists. Well, neither will I – and the US government under the reign of Barack Obama is the biggest terrorist organization around.

Michael Rivero of What Really Happened gives the best explanation I’ve seen for why the government is so intent that everyone must participate in this program. They have run the country into the ground and want to force us all to pay as they vainly struggle to keep things afloat. This is a last ditch effort – the only alternative is economic collapse.

Obama’s utter refusal to compromise or delay Obamacare is more than mere political grandstanding. Obama has to prove he can continue to make the payments on the government debt. Now, based on reports we are getting form people who did sign up for Obamacare, they are being offered policies that cost about $500 a month, and have a deductible in the tens of thousands. That means that for the vast majority of Americans, they will be paying $500 month for insurance that will in fact pay none of their medical costs. So, $500 a month is $6000 a year times 200 million complying Americans equals $1.2 trillion a year pouring into the Health Insurance companies as pure profit, of which the US Government gets almost $200 billion in taxes (plus the IRS fines on those who refuse to sign up). And THAT is why Obama is demanding that Obamacare move forward now, despite a totally botched computer management system and despite 71% public opposition. Absent that new cash flow, the US Government will collapse, and the one year delay proposed by the House of Representatives is far to long to survive without some new source of loot from the public. (source)

It’s clear that our non-compliance in large numbers could stop this madness. We just have to say, “No.  I will not comply.”

Why is this such a big deal?

There are numerous reasons for my planned non-compliance.

1.) People who make more money than I do should not be forced to subsidize my health care. I have no desire for a handout and this is assuredly a handout. One of my closest friends will be paying over $15,000 per year for a family of 5. With the small amount that I’d pay for my family, it is quite clear that my friend, and others like him, would be paying for us. I have always paid my own bills and don’t expect others to take up my slack. I am not a welfare case.

2.) Despite the fact that my family is apparently far before the poverty level, we don’t feel poor.We have everything we need and some of what we want. I budget carefully in order to be able to pay for things like the emergency trip to the dentist for my daughter last week. My child wears nice clothes to school, always has enough to eat and seems to feel that she has the same privileges and possessions as her friends do.

3.) This is going to delete the middle class. Once the wheels are truly in motion, there will no longer be a middle class. Everyone will be dirt poor or well-to-do. There won’t be any middle ground, as average folks watch their expenses skyrocket. Soon people will be forced to make the choice between Obamacare and food.

4.) This is just another way to make the populace dependent on the benevolence of government.Much like the push to put people on food stamps, what better way to make people dependent than to force them to accept this type of assistance? If private health insurance continues to spiral wildly, then almost no one will be able to afford health care without Obamacare.

5.) This is an assault on my medical privacy. Does the government need to know a person is depressed? If a woman skipped a mammogram that they feel is vital? That someone might have opted for an “alternative” treatment? If they have an STD? If they have a sexual dysfunction? NO. It directly violates the doctor-patient privilege. Furthermore, data has already been leaked and the system isn’t even live yet – all sorts of non-medical-professionals will have access to my personal information, both medical and financial.

6.) I’m not having my family’s health care decisions made by other people. What happens when I refuse to vaccinate my children? Right now, that is my choice, but when someone else is paying for it, will I still have the option to say no? I always opt for the least chemical, least invasive treatments possible, but when someone else pulls the strings will that still be an option? If I refuse treatment will they refuse payment? Will I no longer be allowed to leave my home during flu season if I don’t get the flu shot?

What are the ramifications of non-compliance?

Please read the rest at her blog.