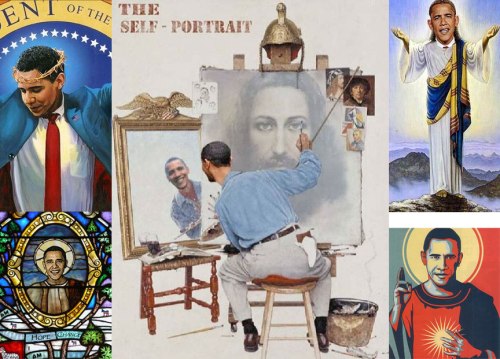 His Heinous Hussein Obama I, tells his stormtroopers that the work they are doing to promote Obama and his agenda is ‘God’s work’.

If you  ever wondered why the Liberal-Left in America supports an ideology anathema to our nation’s foundations, their church teachings and their own liberties, the fact is that Marxism/Socialism IS the true religion of the Democrat/Obama hordes. They have a morality that perverts true biblical and Judeo-Christian morality with their own political morality.  And they believe they have a divine mission to preach the gospel of Obama’s agenda.

Abortion is one of their primary sacraments, the extermination of a baby in the womb is the holiest of rights,  reverencing it as a ‘choice’ and a ‘human right’.

Homosexuality is another such sacrament and doctrinal belief, rising to the point of a holy of holies, demanding to change the biblical definition of marriage and seek to force acceptance of this behavior as normal and good.

There is the doctrine of ‘global warming/climate change’, where scripture is twisted to insist that earth worship is akin to the worship of God.

And now, the great commission has been announced: preaching the gospel of ObamaCare to the insured and soon-to-be uninsured masses.

The Obama Agenda is a religion engaged in class warfare; government-mandated healthcare; militarized federal agencies; empowered FCC to monitor and police the news media and internet; unleashed the IRS to silence Christians and Conservatives; declared biblical Christians as ‘extremists’ and ‘Bitter Clingers’.  THIS, is the true religion of the Left.  Radical Marxism/Fascism is the new religion of the State.

And it is divinely appointed according to Obama.

His Heinous has confirmed that this is true, that his MarxoFascist agenda is a religion in the minds of his seig-heiling mobs and that his agenda is from God.

On Tuesday night Obama praised his SSA Purpleshirts in Organizing For America at a gala event and said that they were “doing God’s work” by preaching the gospel of ObamaCare.  The seig-heling zombies went on to clap like trained seals in a circus.  Obama went on to warn them against Republican heretics who were watching “the wrong newscast” and advocated that the gospel of Obama be preached to them.

I can only say that this scripture keeps crying aloud a klaxon alarm for those with ears to hear:

“Then if anyone says to you, ‘Look, here is the Christ!’ or ‘There!’ do not believe it. For false christs and false prophets will rise and show great signs and wonders to deceive, if possible, even the elect”. – Matthew 24:23-24

How many in our society have been deceived by this false messiah and his Godless agenda masquerading as divine?

Touting the latest White House Obamacare benchmark, President Barack Obama told his political base not to be discouraged by partisan attacks and stressed that their cause is divine.