Obama To Surrender Remaining U.S. Control of Internet Over to ‘The Global Community’ 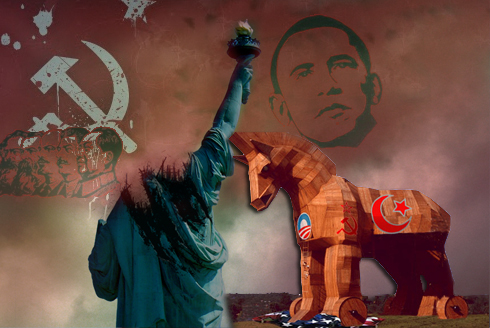 All one can say is – Trojan Horse.  That is what Obama is.

Kiss the last frontier of free information and communication goodbye as the Obama hands it over to the screwed-up mess that is the ‘global community’.

U.S. to relinquish remaining control over the Internet

The Obama regime announced plans Friday to relinquish federal government control over the administration of the Internet, a move likely to please international critics but alarm many business leaders and others who rely on smooth functioning of the Web.

It’s WaPo – so link to headline and description ONLY.  But further info can be gleaned here:

The U.S. government’s plan to give away authority over the Internet’s core architecture to the “global Internet community” could endanger the security of both the Internet and the U.S. — and open the door to a global tax on Web use.

“U.S. management of the internet has been exemplary and there is no reason to give this away — especially in return for nothing,” former Bush administration State Department senior advisor Christian Whiton told The Daily Caller. “This is the Obama equivalent of Carter’s decision to give away the Panama Canal — only with possibly much worse consequences.”

The U.S. Commerce Department announced late Friday it would relinquish control of The Internet Corporation for Assigned Names and Numbers (ICANN) — the organization charged with managing domain names, assigning Internet protocol addresses and other crucial Web functions — after its current contract expires next year.

In response to months of mounting criticism from the global community over sweeping National Security Surveillance programs leaked by former agency contractor Edward Snowden, the administration surrendered to allegations it had too much influence over the Web through ICANN, which designates the roadmap from web-connected devices to websites and servers across the globe.

“While the Obama administration says it is merely removing federal oversight of a non-profit, we should assume ICANN would end up as part of the United Nations,” Whiton said. “If the U.N. gains control what amounts to the directory and traffic signals of the Internet, it can impose whatever taxes it likes.  It likely would start with a tax on registering domains and expand from there.”

ICANN’s Lebanese-born CEO Fadi Chehadé had already recently discussed setting up an office in Geneva — the location of the largest U.N. presence outside New York. If folded into the U.N.’s International Telecommunication Union, the organization would have access to a significant revenue stream outside of member contributions for the first time.

“What little control there is over the U.N. would be gone,” Whiton said.

The greater danger posed by the giveaway lies with the security of the Internet itself. While the U.S. has never used ICANN in a war or crisis situation, the potential exists for it to obstruct Internet commerce or deter foreign cyber attacks – powerful tools in the globalized information age.

2 responses to “Obama To Surrender Remaining U.S. Control of Internet Over to ‘The Global Community’”