INVASION!  In the 1980’s we worried about an invasion of Soviets through the Southern Border.  In 2014, His Heinous, Barack Obama I is sending busses, planes and trucks to pick up millions of ‘unaccompanied children’ and ship them to camps throughout the country in an invasion that the Obama regime and his MarxoFascists embrace.  Estimates are that there may be more than a MILLION of these kids in camps flooding through the border after it was announced in South America that Obama has invited them to send their children as a first step to getting everyone into America.

Back in January Obama’s regime via the DHS  took out ads soliciting vendors to make provisions handle tens of thousands of ‘unaccompanied children’. Today he is bussing them to camps throughout the country and his security forces have employed a “brown shirt rule” and threatened doctors and nurses at these facilities to remain silent about what is going on in these camps or face arrest.

Congressman Jim Bridenstine‘s Facebook page and interview on the radio reveals he attempted to investigate one of these ‘camps’ Obama has set up in his state and he was denied entry and turned away.

Yesterday I was denied access to the HHS facility at Ft. Sill, Oklahoma currently housing up to 1,200 unaccompanied alien children (UAC) who illegally crossed the southern border into the United States.

As a Congressman and House Armed Services Committee member, there is no excuse for denying me access to the UAC facility at Ft. Sill.

What are they trying to hide? Do they not want the children to speak with Members of Congress? As a Navy pilot, I have been involved in operations countering illicit human trafficking. I would like to know to whom these children are being released.

SHTF blog posits some frightening thoughts about this. 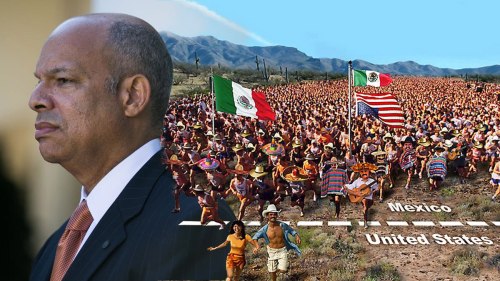 In the run up to the 2008 Presidential election Barack Obama promised he would work to implement a domestic security force which would rival that of the U.S. military. It was an idea heavily criticized by his opponents because of fears that such an organization would bear similarity to World War II era spying groups that policed the citizens of Nazi Germany.

Many dubbed Obama’s proposed force the “Brown Shirts,” a term often used to describe a Nazi assault force and one that has repeatedly been associated with extremist nationalists for their unwavering willingness to take and execute orders without question or contemplation. Brown shirt brigades were tasked with, among other things, arresting dissidents, silencing criticism and wholesale executions of those who could not be reeducated.

For the majority, the notion that such a force would be assembled in the United States was nothing but another conspiracy originating from the lunatic right wing. But in October of 2012 the Department of Homeland Security quietly graduated their first corp of civilian responders under the new program. And since then it is likely that thousands more have been trained and deployed across the country to be called upon in the event of an emergency.

And if there were ever an emergency that required a military level response in the United States, many believe it is happening right now on the Southern border as hundreds of thousands of migrants make their way illegally into America. Because of the sheer number of people heading to the U.S. and the complete failure, whether by chance or by design, of the Obama administration to secure the border, America is now faced with housing, feeding, clothing and providing medical care for more people than it was prepared to handle.

In response, rather than deploy Homeland Security or the National Guard to stop the migration at its source, the Administration has instead set up makeshift internment camps, some of which put scores of people in a room the size of a studio apartment. As a result, disease has spread and civilian emergency personnel have been tasked with providing care.

But among the doctors and caregivers is also a private security force that has been hired to keep the peace. And according to several people working inside the camps, the security groups have turned their attention not towards keeping peace between the migrants, but rather, at keeping the goings on of the facilities completely secret from the general public.

According to the unnamed source, who could not provide video documentation of these events because cell phones are not allowed in the facility, the security force is reportedly calling itself the “Brown Shirts.” The insider says they have been given orders to arrest anyone speaking to the public or using cell phones, and have implemented what is being referred to as “Brown Shirts Law.”

“There were several of us who wanted to talk about the camps, but the agents made it clear we would be arrested,” a psychiatric counselor told me.

“We were under orders not to say anything.”

The sources say security forces called themselves the “Brown Shirts.”

“It was a very submissive atmosphere,” the counselor said.

“Once you stepped onto the grounds, you abided by their laws – the Brown Shirt laws.”

She said the workers were stripped of their cellphones and other communication devices. Anyone caught with a phone was immediately fired.

“Everyone was paranoid,” she said. “The children had more rights than the workers.”

She said children in the camp had measles, scabies, chicken pox and strep throat as well as mental and emotional issues.

The U.S. Government has spent billions of dollars preparing a wide variety of protocols to respond to domestic emergencies. In addition to the Brown Shirt security teams currently in operation at migrant internment camps, the government has also stockpiled billions of rounds of ammunition, rifles, riot gear, armored vehicles, military drones and is believed to have set up hundreds of detention camps around the country in anticipation of events ranging from widespread civil unrest to natural disasters.

In the event of an emergency, the President, having authorized himself by Executive Doomsday Order, will have access to military assets, law enforcement, homeland security, and now a civilian policing force that is, apparently, ready to perform its job without questioning their complicity in covering up the spread of disease and who knows what else.

FEMA camps, believed to exist as a last resort in case the government has to round up and detain tens of thousands of people under a martial law declaration, will require very similar logistics as the existing migrant internment camps.

Now we know that, should you ever reside in a detention camp, there will be no information making its way in or out unless the message has been officially approved for dissemination. Anyone who fails to follow the rules and abide by Brown Shirts Law could have their career destroyed, be arrested or worse yet, charged under terrorism laws that, as the Brown Shirts of old may have referred to it, allow for a “final solution.”