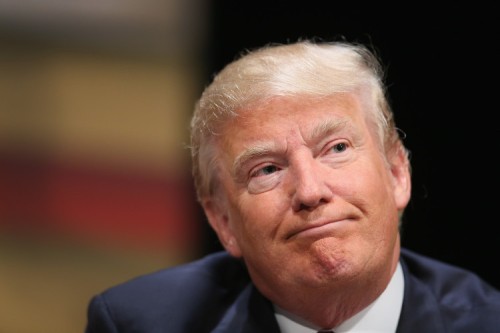 Isn’t it interesting that the very same people and ideology that DEMAND a database on all American gun owners (so we can be safe) are going berserk over a false media-created suggestion attributed to Trump that there should be a database of Muslims in America?

Then Ruling Class never stops in it’s war on Americans it considers plebes and rubes who they want to subjugate under their power and authority to fleece.

A bogus false attribution that the media went blitzkrieg with this morning was that Donald Trump stated that he would ‘certainly implement’ national database for U.S. Muslims.  The fact is, a storm trooping media twerp framed the suggestion in the middle of a query about border security and ran with the false narrative about ‘registration’.

Reporter: Should there be a database system that tracks the Muslims here in this country?

Reporter: But that’s something your White House would like to implement?

Trump: Oh, I would certainly implement that. Absolutely.

Reporter: What do you think the effect of that would be? How would that work?

Reporter: Specifically, how do you actually get them registered in a database?

Reporter: Do you go to mosques and sign these people up?

Trump: Different places. You sign them up at difference places. But it’s all about management, our country has no management.

CNN quickly jumped on the story. Sara Murray asked Trump about a national Muslim database – to which Trump answered that he had no idea “where you heard that…I never responded to that question.” When pressed, Trump insisted, correctly, “I never responded to that question.” He declined to answer the question again – again, because Trump never rules things out when he doesn’t understand the proposal at hand. He stalls.

It’s clear from this exchange that Trump believes the NBC reporter, Vaughn Hillyard, is asking about new Muslim immigrants, not all Muslims currently in the United States – which is totally plausible, given the wording of the questions. After all, Trump has been discussing Muslim refugees, which is the national conversation, not all Muslims; the reporter then asks about “the Muslims here in this country,” to which Trump says that he’d register new Muslim immigrants coming into the country: “It would stop people from coming in illegally. We have to stop people from coming into our country illegally.”

…The media has jumped on all of this to suggest that Trump not only favors a Muslim database, but originated the idea. Sam Stein, the smear artist reporter for The Huffington Post, tweeted about “Trump’s Muslim database idea.” Time reported, “Donald Trump Is In Favor Of Legally Requiring American Muslims to Register on a Database.” MSNBC reported, “Trump crosses new line, endorses database for American Muslims.”

It’s clear from the conversations that Trump doesn’t know he’s being asked by NBC about registering all American Muslims rather than merely Muslim immigrants. That’s not an excuse for his bloviation and lack of clarity. But it does show the hypocrisy, once again, of a leftist media that refuses to treat Democrats by the same standard. For example, when Hillary Clinton was asked at a New Hampshire town hall meeting about Australia’s mass gun confiscation, she gave a Trumpian answer: she said it was “worth looking at.” Unlike Trump, however, she understood the question, as was clear from her full response. There were no headlines in major media about Hillary endorsing wholesale gun confiscation.

All that being said – and proven to be just another attempt by the Propaganda Tools for the Ruling Class, let’s assume for a second that Trump DID suggest a national database to register all Muslims.

Why are the Leftists all-of-a-sudden so upset over the concept of national registration and federal databases?  Consider that these same media morons are all-in and trumpet the need for such ‘databases’ when it comes to registering gun owners, or churches who do not accept homosexual marriage, and often when they demand such ‘registration’ – they cite the necessity to ‘keep the people safe’.

Didn’t Cheerleader Maxine Waters trumpet with much fanfare Obama’s creation of a national “database [which] will have information about everything on every individual in ways that it’s never been done before”?

I don’t recall the media Leftists screaming about that.

I also don’t recall the media going berserk over the national database Obama has created under ObamaCare.

It’s just another in what promises to be an endless string of attempts by the kingmaker media-arm of the Ruling Class to anoint our nominee so as to ensure Hillary is crowned without any question to her ‘winning’ the election.