“I will stand with the Muslims should the political winds shift in an ugly direction.” – Barack Hussein Obama – The Audacity of Hope

And on Sunday Night – He Did Just That… LITERALLY. 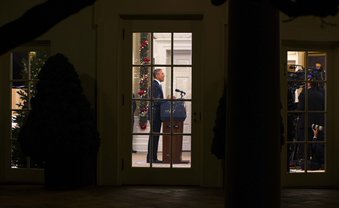 In his incoherent, and rambling lecture to an America he hates, that has by and large become upset over his lack of dealing with Islamic terrorists, Obama essentially did two things in his Stand With The Muslims speech on Sunday night:

1: Obama laid the foundation for defacto gun bans and confiscation by stating it was a national security issue and plans to do so via the DHS No Fly List (which is arbitrary, which is secret, which is without Due Process or oversight by anyone but Obama and it can revoke your rights without recourse if you are put on it).

2. Engaged in Islamic Apologetics and attempted to shame the American people for being wary of Muslims and INSISTED that this cannot be a war between America and Islam.

Again, isn’t it interesting that the American people will be lectured by Obama and his Leftist stormtroopers in the media against ‘Islamophobia’ and insist that the actions of Jihadists is not a reflection of Islam or Muslims – but let ONE WHITE NUTJOB shoot up a Planned Parenthood death camp, why – ALL WHITE PEOPLE ARE TERRORISTS dontcha know?

While the emoting public was happy that Obama’s lecture only lasted 16 minutes (because he was late to make it to hobnob with his Hollywood friends at the Kennedy Center Honors), what they missed was that Obama laid down a clever justification for an Executive Order banning guns and confiscating them.

He cited that gun control was a ‘National Security issue”, which in his perversion of the law means he can assert Executive authority to make mandates, rules and policies to restrict the Second Amendment when it comes to his oft-repeated desire to ‘crack the nut’ on gun control and tie it directly to national security, of which he will assert is his prerogative.

Of course his Praetorian Pravda Media has already been hard at work prepping the ideological battlefield for gun bans and confiscation in the wake of the San Bernadino Islamic terror attack.  Why just today the New York Times, (all the news that is fit for your bird cage liner) just ran a Confiscation editorial on it’s FRONT PAGE – actually stated:

It is a moral outrage and a national disgrace that civilians can legally purchase weapons designed specifically to kill people with brutal speed and efficiency. These are weapons of war, barely modified and deliberately marketed as tools of macho vigilantism and even insurrection.

…yes, it would require Americans who own those kinds of weapons to give them up for the good of their fellow citizens.

Now that his Brownshirts have saturated the media with calls to ban and confiscate – Obama nods in that direction as a preemptive in this speech and sets the stage for more workouts from his pen and phone.

The entire sickening transcript along with the upchucking video is as the link below, and if you are like me – it was easier to read this nauseating pap from Obama than actually watch him speak it.

Obama: To Keep Our Country Safe From Terrorists Means We Must Not Discriminate Against Muslims

UPDATE: Hillary chimes in to insist that using the term ”radical Islam’ an injustice to vast majority of Muslims

But Right Wing Conservative Christian Terrorists and Bigots is perfectly good and right to use and say as often as possible.