The Left Actually Asks For Obama To Become Dictator 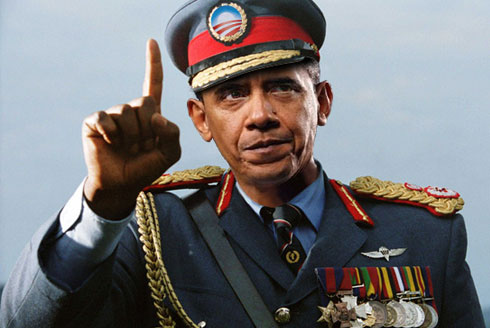 Leftist Bloggers and Media morons declare Obama should  act as dictator, state Obama has power of life and death over every American and should imprison targeted people without due process.

Welcome to the New Amerika comrade.  A land where enough idiots are slaves to Obama or his marxist religion – that they re-elected him to be their king (with a lot of help from fraud and a rigged election in key strategic places).

Now that they have crowned him again – the Marxist Left are no longer hiding their desire for what they wanted their messiah to become all along: dictator.  Screw Liberty, screw separation of powers, the Left is now advocating that Obama act as a dictator to save the nation from the scourge of it’s woes, having blamed ‘undesirables’ – namely Christians, Conservatives and anyone who will not bow down and worship the Left and their welfare state for the state of misery being imposed on them by the very one they worship.

That Obama will destroy what is left of Liberty and the former republic we all grew up under, is not even in question.  We know that as fact, not conjecture.  That the urban elite and black plantation slaves of the DNC have anointed him their king and god, is also not in question, especially now that their spokesidiots and the Obama media are now openly advocating that Obama act as a dictator.

That Obama will actually act as a dictator was already telegraphed by Presidentress Valerie Jarrett in the week before the election when she reportedly stated:

“After we win this election, it’s our turn.  Payback time.  Everyone not with us is against us and they better be ready because we don’t forget. The ones who helped us will be rewarded, the ones who opposed us will get what they deserve. There is going to be hell to pay.  Congress won’t be a problem for us this time.”

The collapsing Leftist rag Newsweek, actually ran and printed a cover and story of the “Obama Conquest” – liking Obama to Napoleon (but painting him to look just like George Washington) – suggesting that Obama has the right and just power of dictatorship at his fingertips while at the same time printing a slogan that the GOP is “old, white and history!”

But the real insanity doesn’t stop there.  The fact enough former Americans willingly follow the calls of Marxist Leftists to actually EMBRACE a dictator, a messiah in a man-god, someone to ‘punish’ the old, white Conservatives and Christians, is a harbinger of a very horrifying and dark future about to engulf everyone.  If the idiot morons who make up the left and dependent class of Democrat slaves actually knew and understood the history they are willfully ignorant of – they would understand that misery, war and holocaust is about to become a ‘new normal’ for a people hijacked by Communist Marxists.

When idiot morons and treasonous jackals create a media narrative that Obama needs to act as a dictator, it is not long before such people in a Mobocracy get what they want.  Clueless as they are – they are ignorant of the history that they who assist lofting a man to such power, often end up blindfolded in front of the guns or guillotine before even the dictator’s avowed political enemies do.

H/T to the Examiner, who first noted, found and reported what the blog writers worshipping Obama were asking Obama to become.

In a diary posted Thursday at the left wingDaily Kos, Michael Alton Gottlieb called for Obama to rule the country as a “benevolent” dictator.

“The American Presidency is a de factodictatorship,” he wrote.

According to Gottlieb, the president “has unprecedented power of Fiat” and “literally has the power of life and death over every citizen in the nation.”

So, in Gottlieb’s view, the president should use that power for “good.”

Echoing Michael Moore, Gottlieb says Obama should “lock up the bankers,” without giving any reason why. Apparently, the fact that they work in a bank is reason enough for them to be stripped of their right to due process and tossed in jail.

“Reform the system. Forgive the debt. Reboot,” he added. Unfortunately, the economy doesn’t work that way, but it probably sounded good to Gottlieb at the time he wrote it.

He also called for Obama to unilaterally declare a national emergency, but doesn’t say exactly why. He says America should “bring the troops home and the military-industrial-complex to heel.”

Gottlieb seems to have forgotten the Executive Order signed by Obama that would spell out what could happen in such a declared national emergency. The order, signed in March, would effectively nationalize everything, including food, water and U.S. citizens.

He talks about fixing infrastructure and rebuilding towns, roads and bridges as if America just emerged from a great world war.

“And, sad to say, with so much ignorant acrimony fueled by the religious fervor of zealots, mixed with a herd of deer in the headlights, only a truly benevolent dictator can get us out of this mess,” he wrote, apparently oblivious to the extreme hatred exhibited by the left during the recently-concluded campaign. Gottlieb has an excuse, however, since the so-called “mainstream media” has remained silent to the never-ending calls for Romney’s murder.

“A people this divided, embittered, armed and dangerous, a tinderbox citizenry, can’t make a silk purse from a sow’s ear. Only someone with the power of ‘make it so’ can remedy this dysfunctional family of Americans and do what is right for the country in the name of the people,” he added.

“If you’re going to be a dictator,” he wrote, “be an American one.”

While liberals and some in the media may salivate over the idea of an Obama dictatorship, such a move on Obama’s part could easily spark the civil unrest Lawrence Sellin predicted in September.

As to civil unrest and violence being bandied about by disillusioned Americans who are still in a state of bewilderment, understand and know – the Obama regime has need of violence and bloodshed for a formal dictatorship and iron fist to become a permanent reality.  The narrative that Right Wing Christian Conservatives are a danger to society is one being greased and set since Obama took office.  All the mass shootings from Gabrielle Giffords to the Dark Knight theater massacre were immediately declared to be the work of Conservative Christians and their ideology.

And a people who are changed from free market prosperity to government dependence with an entitlement mindset, will gladly assist the state in welcoming a dictatorship-sponsored genocide if it means ‘returning things to normal’ and putting food and ‘stuff’ in their hands.

Learn the lesson of history, a desperate people will betray their own flesh and blood for the mere promise of bread.