The racist black homosexual gunman said he was influenced by recent mass killers and wanted to start a Race War.  But all of that is being deliberately ignored by the mainstream Praetorian Marxist Media – who in concert with the Obama regime and The Party are blaming guns and our right to bear them as the cause.

Never letting a crisis go to waste and manufacturing yet another meme to deflect actual attention to the ideology motivation of the gunman, the march to ban guns from the hands of the American Public reaches new fervor in the wake of the on-air assassination of a news crew.

The fact is that Bryce Williams/Vester Flanagan was a pissed-off Homosexual Black Racist that hated Whites, had a history of pushing angry racial grievances everywhere he worked, and wrote in his rambling nut job ‘manifesto’ that he wanted to start a race war in the wake of the Charleston church shooting.  You remember that church shooting by Dylann Roof don’t you? It’s the one where a white nut job who was seen in a photo with a Confederate flag went into a black church and killed nine, which then became an insane national movement to ban Southern culture and anything Confederate.

So now that the facts are out that this murdering psychopath was a homosexual – I think we need to give the Marxist Left a taste of their own recipe – and demand the removal of the rainbow flag from everywhere in society.

In addition, we should call for the stigmatization and criminalization of black racism in society.  It is an obvious clear and present terror threat to the public.  We should declare ‘Black Lives Matter’ to be a Hate Group that advocates ethnic cleansing and murder of Whites.  We should petition that Al Sharpton and Louis Farrakhan be charged with inciting murder, fomenting violence and civil unrest.  We need to shout these demands – make them into a political movement and show the left that turnabout is fair play.  We too can play the game they think they own all the marbles to, and let’s use their own tactics against them. 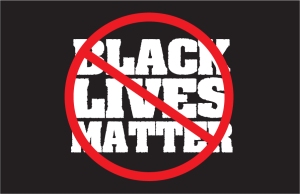 While the Left makes this murder and assassination about guns, let us make it about the very things the gunman was and wrote about.  Let us make this heinous killing, a movement that declares homosexuality and black racism a dire threat against Whites.  Let us make the argument that such people have demonstrated that they will kill discriminately, and we need to ban public access to purchasing homosexual rainbow flags.

Let’s make this a national security issue.  Black homosexual racists are a dangerous threat to White people and the nation, and keep repeating it – shouting down any stupid attempt the Left makes to argue against it.  Facts do not matter to the Left anyway, but we have facts on our side in this case. The murdering psychopath left us his manifesto and like most all of the mass murdering psychopaths of recent years – almost all were raving Leftists and Democrats.  We can add black racists and violent homosexuals to that list now too. 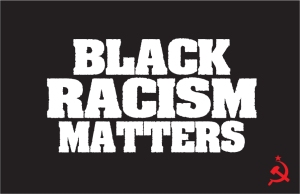 Daniel Greenfield over at FrontPage makes a more salient case of the hypocrisy of the Left when it comes to racism, homosexuality and guns.

This isn’t senseless gun violence. This was a violent racist hate crime.

Can we have a conversation about black racism now? Take down the black nationalist flag that #BlackLivesMatter racists like to wave around? Maybe Amazon and eBay will ban some stuff?

Bryce Williams/Vester Flanagan said the Charleston Church shooting in June spurred his homicidal rage … which exploded this morning when he took the lives of a Virginia reporter and photographer.

ABC News in NYC says it received a 23-page fax from Williams this morning — almost 2 hours after he had killed Alison Parker and Adam Ward. In the document … he says he put a down payment on a gun on June 19, 2 days after the Charleston tragedy.

He wrote, “What sent me over the top was the church shooting. And my hollow point bullets have the victims’ initials on them.” He also addresses the Charleston shooter directly, writing … “As for Dylann Roof? You want a race war (expletive)? BRING IT THEN YOU WHITE (expletive)!!!”

Williams also called out the Columbine and Virginia Tech shooters — “Also, I was influenced by Seung-Hui Cho. That’s my boy right there. He got NEARLY double the amount that Eric Harris and Dylan Klebold got…just sayin.”

The document also includes a “Suicide Note for Friends and Family” … where he says he suffered racial discrimination, sexual harassment, and was attacked for being a gay, black man.

So… career racial grievance artist who constantly blames white people kills two white people. He claims to have drawn inspiration from the media’s shameless exploitation of the Charleston tragedy. Not to mention its usual promotion of mass killers in order to push gun control.

So where’s that national conversation again? This isn’t “senseless gun violence.” This was a violent racist hate crime. It should be treated that way.

Stop talking about gun control and let’s have that chat about black racism. Maybe we can have Al Sharpton do an MSNBC special about it.

Never letting a crisis go to waste for the purpose of shoving his Marxist agenda down our throats, his Heinous: Barrack Hussein NerObama,  tonight used the occasion of a prayer service for the slaughtered children and staff of Sandy Hook Elementary as the springboard for gun control, gun bans and the ultimate goal of abolishing the 2nd Amendment.

Of course this is coming from the regime that supports full-term infanticide and ‘walked’ assault weapons to Mexican drug cartels and heavy weapons to Al Qaeda in Syria and Libya where the slaughter of innocents continues daily. The same man who just celebrated Korean Rapper PSY who sang about killing Americans, a President who had no comment about the threats and violence Union thugs rained down on Michigan last week – tonight – lectures America about violence. Hypocrisy does not matter when there is an agenda to disarm the American people from possessing the ability to defend themselves from a tyrannical government and a deteriorating animalistic society.

In the minutes since the tragedy began unfolding last Friday – the gun-banning hordes of liberal Socialists, Marxists, Gun Ban Advocates and government Alphabets have been incessant in their demands to get guns out of the hands of Americans by insisting it is our liberty to arms that generates the slaughters we are enduring of late.  I’m not going to bother to list the literally THOUSANDS of sources that quote everything from government officials, state governors to Hollywood imbeciles screaming about the need for gun bans and more gun control in the wake of this rampage.

Of course you would be silly to think Congress would uphold their oaths to the Constitution, which most of them see as nothing but an obstacle to be abolished.  Dianne Feinstein announced today what many knew instinctively was going to be inevitable upon our Constitutionally-protected liberties.

Not missing a beat, Obama – after his crocodile tears moment on Friday, took to the airwaves Sunday night to again, insert his political agenda of disarmament of the American people to the forefront.  His sickening screed, carried all the insinuation that he plans to act on his own authority if Congress does not do it for him by stating he “… will use all the power I have” to end the violence.   All for the children, of course.

His Heinous told the nation that “we will have to change” to prevent such horror in the future. ‘Change’ of course in Obama’s lexicon means abolishing the Constitution and the Rule of Law for the imposition of his Marxist worldview.  “We can’t tolerate this any more, these tragedies must end, and to end them we must change … We can’t accept events like this as routine.”  Obama belched, pretending to be tearful at times.  As always, he did not offer any specific policies, but made it certain in the coming weeks he will use whatever powers he can “in an effort aimed at preventing more tragedies like this.”  That prevention is of course – gun bans and abolition of our divine right of self defense.

Even Communist China made demands that America makes no delay in enacting gun control. Why does Communist China care about American gun ownership?  Perhaps they have future plans for our mainland?

It’s a cacophony of deafening noise now.  Media outlets are injecting the MarxoFascist narrative of the necessity of banning guns at every opportunity, suggesting that the Connecticut rampage has changed the political  dynamic of opposing gun control.  The Sunday political porn shows for Obama all stated the same rhetoric from talking points probably sent by the White House; that the shooting rampage was ‘the final straw’ in the gun control debate – and it was time to end America’s nightmare of citizens having the right to own firearms, asserting they had a moral imperative to ban and restrict their ownership and availability.

I imagine any opposition vocalized or stated of the Marxist agenda towards disarming American citizens, will be met with the Alinsky-styled suggestion that anyone supporting our Constitutional Rights advocates killing kindergartners.  Of course, coming from advocates of killing infants in the womb – the hypocrisy will be lost on everyone else rushing to hide themselves from any labels the MarxoFascist Left is going to paint on them.

So a reminder as the political demands for defacto abolishment of the Second Amendment reaches screeching levels from the Regime and the Ruling Class oligarchs in D.C. – genocides by national Socialists/Marxists by their own people always occurs after they are disarmed by those regimes.

Time will tell if the Sandy Hook School rampage was a Reichstag fire, or merely another crisis capitalized upon by the demons in D.C.  But make no mistake – disarming the American people is now a top priority.  If they manage to achieve this – then our genocide at their hands in not far off in the future.  Mark these words, because history teaches that to be a fact.