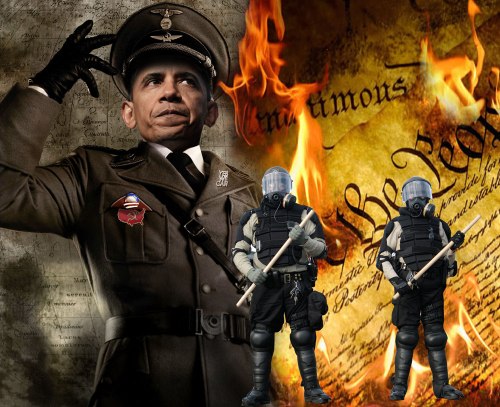 Obama targets opposition using the IRS.  A corrupt Judiciary declares who can be on a ballot. The Senate moves to Repeal the First Amendment under the guise of election ‘fairness’.

I have said this ad infinitum over the last 5 years: America has seen her last free and “honest” nationally-impacted election.  We went Soviet.  Cook County corruption went national, and this people have no clue whatsoever what has happened to it.

America was overthrown from within – by a Marxist/Fascist juggernaut and nothing is stopping it.  The Ruling Class Republicans are complicit in this coup because they want a piece of the new power paradigm that makes government god, creates a permanent underclass of dependent serfs, and a caste of Nobles whom the underclass must serve without question.  Because after all, in the minds of those who now rule us, we little people cannot be trusted with liberty because we do not know what is good for us.  Government will now decide our fates .  What we think will correspond to what we receive and are allowed to have in conjunction with whom we must vote for, income inequality notwithstanding.

• The IRS will continue to target, intimidate and punish Conservative groups in order to silence them and render any political influence irrelevant.  The paper trail goes all the way to the White House – but the Praetorian MarxoFasicst media has declared via press releases from the DNC that the effort to get to the bottom of the scandal is a ‘racist’ ‘witch hunt’.

• Judge orders 25 term congressman John Conyers to be put onthe ballot after he failed to obtain enough signatures for the primary election.  So when the law is not met, the Ruling Class will simply decree what is legal and what is not by using ideological judges when it cannot decree them by Executive Order.  It will do as it pleases to further the political party and the ideology rather than uphold the law.  The Ruling Class is now selecting candidates the people have to ‘choose’ from, and doing so by judicial or executive order.  This is pure Sovietism.

• 41 Democrat Senators signed onto a bill to repeal the first Amendment:  Senate Joint Resolution 19 – “an amendment to the Constitution of the United States relating to contributions and expenditures intended to affect elections.  Under the guise of ‘fairness’ Harry Reid and the MarxoFascist Democrats and a few Republicans have decided that you will have no right to support or speak to those issues and candidates the Junta does not approve of.

The Emerging Junta
The IRS’s illegal actions — and its efforts at cover-up — undermine the foundations of our government.

I will confess to a little despair over the relatively mild reception that has greeted the evidence, now conclusive and irrefutable, that the Internal Revenue Service, under the direction of senior leaders affiliated with the Democratic party, was used as a political weapon from at least 2010 through the 2012 election. It may be that the American public simply does not care about the issue; it is always difficult, if not impossible, to predict what issues will seize the electorate’s attention, or to understand why after the fact. It may be that the public does not understand the issue, in which case a brief explanation of the known facts may be of some use.

When law-enforcement agencies and federal regulators with extraordinary coercive powers are subordinated to political interests rather than their official obligations — to the Party rather than to the law — then the law itself becomes meaningless, and the delicate constitutional order we have enjoyed for more than two centuries is reduced to a brutal might-makes-right proposition.

Here is what happened. In the run-up to the 2012 election, senior IRS executives including Lois Lerner, then the head of the IRS branch that oversees the activities of tax-exempt nonprofit groups, began singling out conservative-leaning organizations for extra attention, invasive investigations, and legal harassment. The IRS did not target groups that they believed might be violating the rules governing tax-exempt organizations; rather, as e-mails from the agency document, the IRS targeted these conservative groups categorically, regardless of whether there was any evidence that they were not in compliance with the relevant regulations. Simply having the words “tea party,” “patriot,” or “9/12” (a reference to one of Glenn Beck’s many channels of activism) in the name was enough. Also targeted were groups dedicated to issues such as taxes, spending, debt, and, perhaps most worrisome, those that were simply “critical of the how the country is being run.” Organizations also were targeted based on the identity of their donors. Their applications were delayed, their managements harassed, and the IRS demanded that they answer wildly inappropriate questions, such as the content of their prayers. When an internal review threatened to expose the fact that, in the words of the IRS’s inspector general, the agency was “using inappropriate criteria to identify organizations applying for tax-exempt status,” Ms. Lerner staged an event at a tax-law conference at which she used a planted questioner to preemptively disclose the issue on her own terms, and the agency began claiming that the tea-party targeting, while regrettable, was the work of a few misguided agents at a satellite office in Cincinnati. In fact, the direction came from Washington and was, in the words of the agency’s own e-mails, “coordinated with” a senior manager there, Rob Choi, director of rulings and agreements. This began at the behest of Democratic officeholders, including Senator Carl Levin of Michigan, who requested that the IRS disclose to him information about tea-party groups that it would have been illegal for the IRS to disclose. It subsequently emerged that IRS officials had intentionally misled members of Congress and investigators about the matter.

During this period, IRS operatives were, according to the Office of Special Counsel, openly campaigning for the reelection of Barack Obama on IRS time using IRS resources. A few were later disciplined for their actions, but the extent of the political activity of IRS agents remains unknown.

The IRS is not just a revenue agency — it is a law-enforcement agency, a police agency with far greater powers of investigation and coercion that any normal police force. Its actions in this matter are not only inappropriate — they are illegal. Using government resources for political ends is a serious crime, as is conspiring to mislead investigators about those crimes. But so far, other than holding Lois Lerner in contempt for refusing to comply with the demands of congressional investigators, almost nothing has happened. The characteristic feature of a police state is that those who are entrusted with the power to enforce the law are not themselves bound by it.

Context is again here important. The IRS scandal is not a standalone issue but comes at a time when the Democratic party is seeking to radically expand the power of the federal government to regulate political speech; we can safely assume that the same people who were using the IRS’s political-speech regulations for political ends will have precisely the same motives and precisely the same opportunity to use other political-speech regulations for precisely the same political ends: to benefit their allies and persecute their enemies. So committed are the Democrats to keeping their critics under the thumb of federal police powers that they have introduced an amendment in the Senate that would effectively repeal the free-speech provisions of the First Amendment, those having proved inconvenient to Democrats in Supreme Court rulings such as McCutcheon andCitizens United, the latter case involving a federal attempt to make it a crime to show a film critical of a political figure under unapproved circumstances.

The most important question that must be answered in this matter does not involve the misbehavior of IRS officials and Democratic officeholders, though those are important. Nor is it the question of free speech, vital and fundamental as that is. The question here is nothing less than the legitimacy of the United States government. When law-enforcement agencies and federal regulators with extraordinary coercive powers are subordinated to political interests rather than their official obligations — to the Party rather than to the law — then the law itself becomes meaningless, and the delicate constitutional order we have enjoyed for more than two centuries is reduced to a brutal might-makes-right proposition. Elected officials and public servants of both parties take an oath to uphold the Constitution of the United States and to faithfully discharge the duties of their office. That oath is now being tested. The IRS investigation is no mere partisan scandal, but a moral challenge for the men and women who compose the government of this country. Whether they are sufficient to meet that challenge is far from obvious, but the evidence so far is not encouraging.