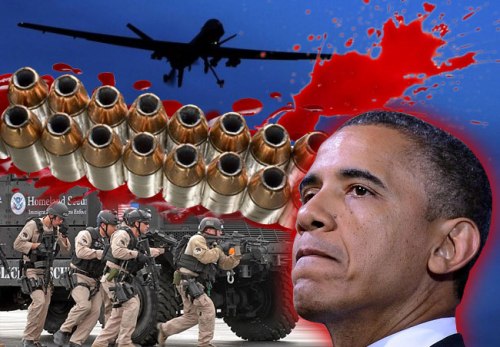 The Department of Homeland Security becomes militarized at nearly the same time Obama asserts right to use drones to kill whom they deem a ‘threat’ to national security.

I was musing to myself the comments made last week by Obama’s ‘Gruppenfuhrer’ stooge Al Sharpton who weighed in on the government push to disarm Americans by saying:

“First of all, if the government were to come to disarm you, you would not be able to use an automatic weapon to defend yourself. Let’s be serious. We’re in a world of drones now so the Second Amendment would not help you in that area. It is absurd to try to cite that.”

In plain language, what Sharpton said (which is the Obama Regime’s opinion) – is that when Obama and the Congressional Politburo orders the American people to be forcibly disarmed – our arms will not be able to save us – because Obama has armed military drones at his disposal – and he can kill you with a simple word from 17,000 feet up, without you even knowing it was coming.

THAT’S what he meant.

One has to wonder due the quip about using drones if Sharpton has an inside line to His Heinous – Barrack The First considering the recent connect-the-dots news about using drones to “legally” kill American citizens in the event this regime deems them “an imminent threat of violent attack against the United States.”

The fact Al Qaeda is mentioned in cursory fashion in the secret directive obtained by NBC news (for cover) for this action, is a transparent lie when Obama has already shown us all that he will arm Al Qaeda operatives in Libya, Egypt and Syria with F-16s, tanks and ManPads.  In fact this author believes that the Benghazi Egypt massacre by Al Qaeda operatives back on September 11, 2012, where Obama left Americans to die – was to rid the evidence of Obama’s complicity in arming a branch of Al Qaeda he was running arms to in Syria to help in the overthrow of secular dictator Bashar Al-Assad.  An action former CIA director Leon Panetta actually stated he was in favor of in testimony today.

The White Paper that directs his regime to use drone strikes on Americans gives Obama the power to raise a thumb up or down to decide if a citizen he deems a threat should be blown to molecules without due process.  In The Won’s magnanimity however,  he did not reserve the power of life and death to just himself.  The paper states that  “an informed, high-level official” (as yet unnamed) of the government can also decide when a citizen is an imminent threat, and if capture is not feasible, they may be killed with a drone strike.

On top of all this, DHS just announced yet ANOTHER massive purchase of hollow point ammunition.

As DHS continues to grow and expand – being armed to the teeth and drones being ordered above American airspaces while DHS conducts armed ‘training exercises’ of intimidation in major Southern cities – methinks Obama is keeping one of his campaign promises: to create a personal Praetorian, or civilian ‘national security force’ – “just as powerful, just as well funded as the U.S. military”.

Coach Is Right has their thoughts that dovetail mine.

Obama building a personal army at the Department of Homeland Security

In July of 2008, presidential candidate Barack Hussein Obama stated that Americans could no longer “…continue to rely on our military in order to achieve the national security objectives we’ve set. We’ve got to have a civilian national security force that’s just as powerful, just as strong, just as well-funded.” (1)

It was 4 months before the election yet no one in the “mainstream” media seemed interested in asking a presidential candidate about his promise to create a “civilian security force” with a $440 billion annual budget! What, exactly, would it do? Who would be in charge? Where would a force the size of the U.S. Military be housed? Would its members—like their military counterparts—be armed? How much authority would such a force exercise over the American people? From whom would it be derived? In his speech, Mr. Obama made it sound as though most of the members would be volunteers. If so, why would a near half trillion dollar budget be necessary?

In the almost 5 years since Obama’s frightening pledge to put a powerful, unidentified force in charge of “national security,” the American public has discovered that:

Then, in October of 2012, Barack Obama signed an Executive Order creating the “White House Homeland Security Partnership Council,”  its ostensible purpose to “…advance the federal government’s use of local partnerships to address homeland-security challenges.” But the DHS was ALREADY working with local governments across the nation. Why would Obama intercede in this way? (4)

Because “he [wanted] to be able to dictate who gets to participate in these local partnerships – and they don’t have to be local law enforcement or local government officials to do so. These partnerships will be with ‘the private sector, nongovernmental organizations, foundations and community-based organizations.’  All of whom will be handpicked by Obama and those federal bureaucrats he appoints.” (4)

The National Defense Authorization Act empowers Obama ON HIS OWN to determine who represents a threat to the United States and to have that individual detained and imprisoned. And the Executive Order he signed allows the president to select like-thinking “deputies” nationwide, authorized to act on Obama’s behalf. These men will have little or no concern for the security of the United States. Rather, they will be working exclusively to increase the power of the president by threatening and intimidating his political enemies.

Barack Obama is at last building his Civilian National Security Force. It consists of a thoroughly corrupt organization of the far left, employed by the DHS and empowered by the president himself to ignore the Constitution and the laws of the United States.  Representing the 3rd largest department in the federal government, these DHS forces of a Constitutionally ineligible president are working to implement a police state—a dictatorship in which all “rights” will derive from the sole authority of Barack Obama.

Make no mistake–Barack Obama has every intention of imposing his will on the American public by creating a Marxist dictatorship during his second term. It is for that reason the assault has begun on American gun owners, as an armed public can fight back and defeat such would-be tyrants.

It’s difficult to conceive of an American president deliberately arming a federal force for the purpose of killing and enslaving the American people. But we will see it happen.