The Mainstream Media Campaign to Help Elect Our First Queen 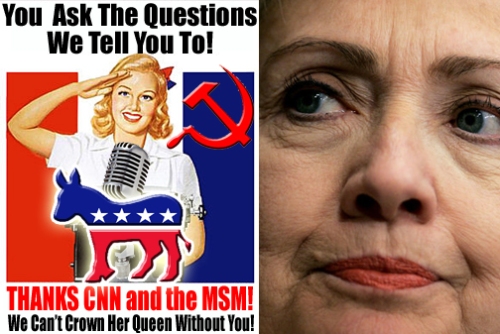 When the Founders made Freedom of the Press part of the first Amendment in the Bill of Rights, they did so because they understood the importance a free press would be in keeping the government and people in power under a microscope of scrutiny to ensure our liberties were safe from ambitious wannabe despots.

A Free and independent press is vital to the maintenance and survival of a republic.

We no longer have that with the Mainstream media in America today.

Nothing makes this more self-evident than learning that the Democrat Debates are being stacked with questions that are pre-approved by the “media” or the various campaigns in order to paint the candidates in whatever colors the press wishes to paint them.

For Hillary, the color is Royal Purple.

After Her Thighness’ falter over her waffling over the NY Governor’s Driver’s License Program and the subsequent trashings from fellow Democrats and then the hard questions from Tim Russert, the Clinton Crime Machine went into full intimidation mode.

Like Don Vito Corleone, the Hillary Campaign made Wolf Blitzer and CNN an offer they could not refuse, and to make Hillary win back the ground she lost in the last few weeks – it was no surprise to learn that the official News Agency of the Clinton News Network would come through in the next debate to ensure she was seen as the hands down winner.

Tim Russert meanwhile should make sure his bedding is stain proof, because there’s bound to be a severed head he might wake up to sometime soon.

There’s a great deal of controversy brewing concerning implications that CNN not only stocked the audience at Thursday’s Democrat Presidential debate, but also controlled the questions attendees asked.

So much for Wolf Blitzer not caving into pressure from the Clinton campaign.

Maria Luisa, the UNLV student who asked Hillary Clinton whether she preferred “diamonds or pearls” at last night’s debate wrote on her MySpace page this morning that CNN forced her to ask the frilly question instead of a pre-approved query about the Yucca Mountain nuclear waste repository.

“Every single question asked during the debate by the audience had to be approved by CNN,” Luisa writes. “I was asked to submit questions including “lighthearted/fun” questions. I submitted more than five questions on issues important to me. I did a policy memo on Yucca Mountain a year ago and was the finalist for the Truman Scholarship. For sure, I thought I would get to ask the Yucca question that was APPROVED by CNN days in advance.”

CNN ran out of time and used me to “close” the debate with the pearls/diamonds question. Seconds later this girl comes up to me and says, “you gave our school a bad reputation.’ Well, I had to explain to her that every question from the audience was pre-planned and censored. That’s what the media does. See, the media chose what they wanted, not what the people or audience really wanted.

…Yet, this story gets more delicious, for according to CNN’s transcript of the debate, Luisa’s real name is Maria Parra Sandoval …A reader at Dan Riehl’s Riehl World View accurately pointed out that Parra-Sandoval used to be an intern for Senate Majority Leader Harry Reid (D-Nevada).

Yet, that wasn’t the only planted audience member/questioner Thursday evening.

LaShannon Spencer, who was identified as a member of the First African Methodist Church, asked the question near the top of the 10 pm Eastern hour. She highlighted how health care and the Iraq war had, in her view, dominated the questions during past debates.

Would that be the same LaShannon Spencer who is, or at least was the political director of the Democrat Party of Arkansas?

…Another plant was Khalid Khan…For years he has been a prominent Muslim leader — the president of the Islamic Society of Nevada…Nor, as it turns out, is Khalid Khan a stranger to CNN.

Add it all up, and CNN stocked the questionning members of the audience with — at the very least, as who knows what else the blogosphere will identify?!? — a former intern for Sen. Reid, a former head of the Arkansas Democrat Party, and a prominent Muslim leader.

Honestly, folks, the Democrats made a huge stink about not appearing in any debate sponsored by Fox News for fear of its biases. Yet, it seems a metaphysical certitude that FNC, with all the focus upon it, wouldn’t have dared exhibit such obvious partiality.

In fact, just imagine the uproar that would have emanated from press members if Fox had employed such shenanigans. This likely would have been the lead story of all three broadcast network news programs Friday, as well as featured every hour on the hour at CNN and MSNBC.

Of course, maybe this explains why the Democrats refused the FNC debates in the first place, which would be an interesting story for a news magazine like “60 Minutes,” “Dateline,” or “20/20” if they weren’t all vested in the same hypocrisy…