Seconded – by the new Communist Mayor of New York.

I forsee Gulags and Ghettos in  the near future given where this kind of rhetoric ALWAYS goes according to history.

DE BLASIO BACKS CUOMO: WANTS CONSERVATIVES TO GET OUT

New York Mayor Bill de Blasio emphatically backed New Governor Andrew Cuomo’s controversial remarks that “extreme” conservatives – which he defined as being pro-life, second amendment advocates, or supporters of traditional marriage – “have no place in the state of New York.”

“I stand by that 100 percent,” de Blasio told reporters at the U.S. Conference of Mayors in Washington, D.C. on Thursday.

Governor Cuomo riled up conservatives in New York state as well as all over the country when he told a local New York State radio program last Friday “extreme conservatives who are right-to-life, pro-assault-weapon, anti-gay….have no place in the state of New York, because that’s not who New Yorkers are.” 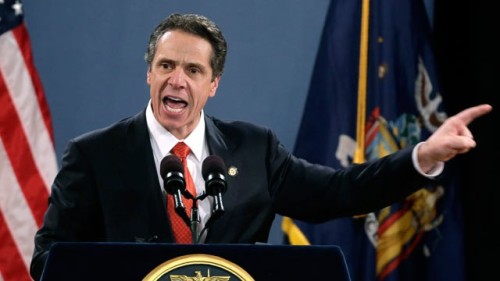 There’s no place for views or beliefs contrary to the Marxist Left Agenda in Cuomo’s New York according to the governor himself.

While this is news from last week, the fact that a sitting governor specifically lists the political and moral beliefs of Conservative Christians as ‘having no place’ in his state – should frighten every American to their core, not just those in his state.  Can the government now decide that if you oppose abortion, revere the Second Amendment and hold to values opposed to MarxoFascism that you must surrender your beliefs or move out the state?  Will this progress to policies that will dictate you cannot work, live or earn a living in New York if you believe in things contrary to the Democrat/Marxist party in power?

This is the mark of a beast.  When the government declares that those who hold to biblical, moral and political values opposed to the party in power ‘have no place’ in their state because ‘that is not who we are’ – then that same government and ideology will transform society into a totalitarian state.  A political ideology that publicly states it will not tolerate dissent is the first stage of a political and physical purge.

History teaches the lesson that this is how genocides begin.  They progress from simple demonization, to advocation of ostracizing which is always quickly followed by criminalization before pograms of eradication are adopted and passed.

America is now well on that path.  This is not just an isolated revelation in New York – but it is a Zeitgeist spreading from Washington throughout the nation.  Our future may well be sealed to this fate.

No Place For Dissent In Cuomo’s New York

In a media interview Friday, Gov. Andrew Cuomo tagged his opponents as “extreme conservatives” and said that they “have no place in New York.”

Who are these “extreme conservatives?” Opponents of gun control, abortion, and homosexual marriage, that’s who:

“The Republican Party candidates are running against the SAFE Act… Their problem is not me and the Democrats; their problem is themselves. Who are they? Are they these extreme conservatives who are right-to-life, pro-assault-weapon, anti-gay? Is that who they are? Because if that’s who they are and they’re the extreme conservatives, they have no place in the State of New York, because that’s not who New Yorkers are.”

Let’s deconstruct this for a moment. New York’s ultra-draconian “SAFE Act” permanently outlawed all military rifles developed in the past sixty years. It created State Police surveillance of all ammunition sales, and a required that the State Police keep a database of all ammunition purchases. It criminalized the possession of firearm magazines that were legally purchased decades ago without compensating the owners. It was passed at 2 A.M. with no committee hearings and no debate. Legislators were given 15 minutes’ notice to vote on a 39 page bill — not enough time to read it. And Cuomo waived a legal requirement that a three-day waiting period for public input occur before the legislation took effect.

And if you think that violates the Second, Fourth, and Fifth Amendments to the U.S. Constitution… you “have no place in the State of New York.”

Do you oppose abortion, which the science of biology absolutely proves kills a nascent human being in utero — largely to maintain culture of reckless promiscuity? Then you’re an “extremist” who has “no place in the State of New York.”

Do you oppose homosexual marriage, which did not exist in any culture in the history of mankind until 20 years ago or so? You extremist! You have “no place in the State of New York.”

The idea that a sitting governor of the fourth-largest state in the nation can tell people he disagrees with politically that they have “no place” in the state he governs is breathtakingly frightening. I cannot recall any American governor anywhere essentially telling American citizens to shut up or get out of his state. What about the constitutional rights to free speech, free association, and freedom of the press? What ever happened to the Madisonian idea that the rights of political minorities are to be protected from the tyranny of the majority? Whatever happened to all the incessant leftist rhetoric about “diversity” and “multiculturalism”? I guess “diversity” doesn’t apply to conservatives, does it?

Answer: it isn’t different. Every dictatorship marginalizes, delegitimizes, and dehumanizes its opponents before it strips them of their rights and crushes them.