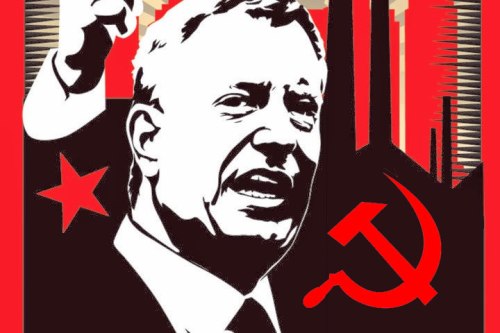 Seconded – by the new Communist Mayor of New York.

I forsee Gulags and Ghettos in  the near future given where this kind of rhetoric ALWAYS goes according to history.

DE BLASIO BACKS CUOMO: WANTS CONSERVATIVES TO GET OUT

New York Mayor Bill de Blasio emphatically backed New Governor Andrew Cuomo’s controversial remarks that “extreme” conservatives – which he defined as being pro-life, second amendment advocates, or supporters of traditional marriage – “have no place in the state of New York.”

“I stand by that 100 percent,” de Blasio told reporters at the U.S. Conference of Mayors in Washington, D.C. on Thursday.

Governor Cuomo riled up conservatives in New York state as well as all over the country when he told a local New York State radio program last Friday “extreme conservatives who are right-to-life, pro-assault-weapon, anti-gay….have no place in the state of New York, because that’s not who New Yorkers are.”

A Great Purge in America Is Now Underway

From the banning of Christian exercise in public places to the military classification of Christians and Conservatives as ‘domestic terrorists’ – sets the stage for what is next.

Evangelical Christians and members of the Tea Party are a threat to the nation and any soldier donating to those groups will be subject to punishment under the Uniform Code of Military Justice according to the U.S. Army under Obama.

A soldier who attended the Oct. 17th briefing told me the counter-intelligence agent in charge of the meeting spent nearly a half hour discussing how evangelical Christians and groups like the American Family Association were “tearing the country apart.”

Soldiers attending a pre-deployment briefing at Fort Hood say they were told that evangelical Christians and members of the Tea Party were a threat to the nation and that any soldier donating to those groups would be subjected to punishment under the Uniform Code of Military Justice.
…“The American public should be outraged that the U.S. Army is teaching our troops that evangelical Christians and Tea Party members are enemies of America, and that they can be punished for supporting or participating in those groups,” said Berry, a former Marine Corps JAG officer.“These statements about evangelicals being domestic enemies are a serious charge.”

The soldier told me he fears reprisals and asked not to be identified. He said there was a blanket statement that donating to any groups that were considered a threat to the military and government was punishable under military regulations.

“My first concern was if I was going to be in trouble going to church,” the evangelical Christian soldier told me. “Can I tithe? Can I donate to Christian charities? What if I donate to a politician who is a part of the Tea Party movement?”

…“Why is the Army engaged in these anti-Christian training propaganda briefings?” asked Perkins, himself a veteran of the Marine Corps. “The only explanation is that this is a deliberate effort of the Obama administration to intimidate and separate soldiers from Christian groups that they support and that support them.”

This is not an isolated incident – but POLICY being administered by the Obama regime.  Policy in WRITING:

Just days ago, soldiers at Camp Shelby in Mississippi were instructed that the Christian conservative American Family Association is a domestic hate group. A month earlier, a security presentation portrayed the Founding Fathers as extremists. Before that, Breitbart News reported on a Christian chaplain who was officially censored by military commanders for talking about the importance of religious faith. And several months before that, Lt. Col. Jack Rich at Ft. Campbell, Kentucky, instructed soldiers that traditional Christian beliefs are incompatible with “Army values.”

All this started in April, when Breitbart News broke the story of top Pentagon brass meeting with an anti-Christian activist calling for court-martialing observant Christians who share the gospel of Jesus Christ with others in the military. This activist calls them “fundamentalist monsters” who are “enemies of the Constitution” and should be punished for “sedition and treason.”

All along, the nation was told these were a series of isolated incidents, not authorized by military leadership. Now military documents suggest otherwise. Judicial Watch used a FOIA request (Freedom of Information Act) to obtain a document from the Defense Equal Opportunity Management Institute (DEOMI), which is part of the Department of Defense (DOD). In this 133-page training document, entitled “Extremism,” on pages 32-33, under “Lesson Emphasis,” it claims to:

In addition – the Obama regime has ORDERED the removal of arm patches and references to the Gadsden/Navy Jack flag worn by SEALs because the Obama regime says the flag is “too closely associated with radical groups.”

WARCOM and GROUP TWO/ONE have pushed out the uniform policy for NWU III and any patches worn on the sleeve.

Again the only patch authorized for wear is the American flag on the right shoulder. Please pass the word to all

When a friend of mine asked his leadership the same question, he was told, “The Jack is too closely associated with radical groups.” We must assume that this thought policeman embedded in the SEAL community is speaking of the Tea Party, whose flag (which also dates from the American Revolution) depicts a snake with the same defiant slogan as The Navy Jack.

This begs yet another question: Who defines “radical group”? The last time I checked, all military personnel are under oath to “support and defend the constitution against all enemies, foreign and domestic.” The Tea Party stands for constitutional rights and founding principles of civil liberties and limited government. Radical? Not unless you’re a leftist hell-bent on destroying the foundations of our country. Or as the President has stated as the objective of his presidency, “to fundamentally transform” America.

TSHTF’s commentary on this incident is not only accurate to the intents by this regime, but ought to raise your awareness to what is about to happen as the Obama regime slams down an iron fist of tyranny.

In 2009 the Missouri Information Analysis Center released an analysis of militias and revolutionary movements operating within the continental United States. It was dubbed the MIAC report, and detailed specific signs indicative of those who may have a proclivity towards domestic terrorism or rebellion.

The Gadsden flag, which closely mirrors the Navy Jack and shares the same motto, and which was also used during the American Revolutionary War, was identified as political paraphernalia often used by radical extremist groups in the United States.

The report called for law enforcement officials on the local, state and Federal level tobe on the look-out for those displaying variations of the Gadsden flag, as well as bumper stickers supporting the U.S. Constitution and third-party candidates like Ron Paul.

What should be clear from the government’s latest move to wipe away any official association with the Gadsden rattlesnake and motto is that those supporting any movement not 100% in line with official narrative are to be considered potential terrorists.

In today’s America, supporting the wrong cause, wearing the wrong clothes, pasting the wrong bumper sticker on your car, or saying the wrong thing on the internet can very easily lead to you being added to one of the government’s many red lists and identifying you as an enemy of the state.

They may not be rounding people up just yet for their transgressions against the state, but orders can be given at anytime under the banner of Patriot Act and the National Defense Authorization Act to detain those who could pose a threat to the greater good.

So the narrative is set and as I have been warning, history teaches that WITHOUT EXCEPTION every single time a government and a ruling class demonize and castigate a group of people, that group is ALWAYS exterminated and purged.  No exceptions to that historical fact, and it’s now underway.

Nine senior commanding generals have been fired by the Obama administration this year, leading to speculation by active and retired members of the military that a purge of its commanders is underway.

Retired generals and current senior commanders that have spoken with TheBlaze say the administration is not only purging the military of commanders they don’t agree with, but is striking fear in the hearts of those still serving.

“Obama will not purge a civilian or political appointee because they have bought into Obama’s ideology,” Vallely said. “The White House protects their own. That’s why they stalled on the investigation into fast and furious, Benghazi and Obamacare. He’s intentionally weakening and gutting our military, Pentagon and reducing us as a superpower, and anyone in the ranks who disagrees or speaks out is being purged.”

Once men with a moral foundation are removed from positions of leadership in the military, the military can and will be used to follow orders that are immoral.

It’s underway, right in front of your face.