Executive Amnesty : Citizens To Be Pushed ‘Into The Shadows’ While Obama’s “New Americans” Enjoy The Sunlight 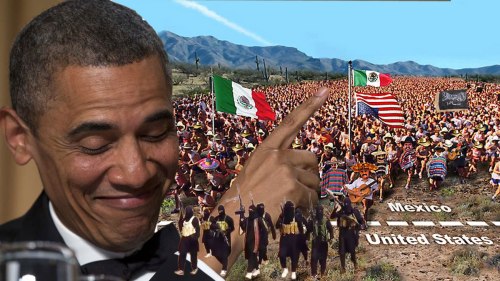 The foreigners who reside among you will rise above you higher and higher, but you will sink lower and lower. – Deuteronomy 28:43

I had blogged on this information last week right after it broke on the Mark Levin Show – and additional corroborating evidence has followed that need attention, so instead of updating the original entry – I’m creating this one with links to the original.

In a nutshell, Obama has sown the ‘seedlings’ of our own invasion, overthrow and subjugation by both the Islamic Jihadists and third world South American Socialists whom he caters and supports.  He intends to make them “New Americans”.  In these conference calls discussing the actual ‘plans’ of Obama’s Amnesty decree implementation, it was stated that these “New Americans” would not assimilate into the American culture – but instead they would “Navigate not assimilate”, and create “a country within a country” to be given immediate Social Security benefits, money, housing, medical care, education and IMMEDIATE CITIZENSHIP so they can “vote”.   All of that stated to be ‘benefits’ that these Task Force Commissars and White House Spokesmen said these ‘New Americans’ ” are entitled to”.

Where the hell is the GOP on these insidious plans?

Well, the Ruling Class GOP Leadership has been lecturing us for months that they support flooding the country with ‘immigrants’ and to provide illegal insurgents a ‘pathway to citizenship’.  Jeb Bush lectured that open borders is “love” and that the millions upon millions of welfare-seeking South American poor are “better people” than the American people.  So DO NOT expect the GOP or the Ruling Class Rethuglicans to lift a pinky finger to actually stop what Obama is doing.  We may get sound bites, but absolutely NOTHING of substance will be done, because the GOP leadership and their funding donors from the Chamber of Crony Fascism wants this Amnesty as badly as Obama does.  They are completely on-board with Obama’s actions and efforts to facilitate an invasion of third world squatters and Middle Eastern “Refugees” whom have no intention to become Americans while the government hands them YOUR money, YOUR jobs, YOUR rights and benefits, so they can subjugate and overthrow us on our own dime.

You will go into the shadows.  You will be forced to comply with edicts and decrees and laws.  They, will be exempt.  They will be lifted up, provided for at your expense – in order to relegate you and your children to second class, low caste and disapproved status.  They will be the head, YOU will be the tail – exactly as God warned a nation of His people what would happen to them if they ever forsook Him.

And this nation has, forsaken God, and replaced Him with Self and government.

I will note this observation, Obama has employed a similar tactic that Adolf Hitler himself used back in the 1920’s and 30’s.  Everything they intended to do in order to fundamentally transform their societies and rid their own country of ‘undesirables’ while lofting up their preferred ‘peoples’, was hidden in plain sight and stated in subtle and clever language long before the actual machinations of policy and subjugation were placed into effect.  They did not keep their intentions secret.  Hitler told the world what he intended to do.  He wrote about it.  He spoke about it.  The world simply was not listening and did not take him seriously.

Neither does this country take what Obama wrote and said he would do – seriously.

Citizens Will Be Cast Into The Shadows

The White House has plans to legalize 13 to 15 million illegal immigrants who will then establish a “country within a country.”

The following Mark Levin interview with Susan Payne is shocking but it also puts all the pieces into place.

Susan Payne is a contributor to WCBM, Baltimore and Co-Host of the Pat McDonough Radio Show,

Unbeknownst to the Obama officials, Ms. Payne was invited to listen in on conference calls at an immigration rally. Cecilia Munoz, director of the White House Domestic Policy Council, and 16 members of the White House cabinet were on the first call. White House officials were on all three calls.  What Ms. Payne learned needs to be immediately shared with Congress and the public.

It should be noted that Ted Hayes, founder of America’s Black Shield, also listened in on these calls.

The “Task Force of New Americans” and the “Receiving Communities” are part of a plan by the Obama administration to develop a “country within a country” which will eventually form a new, and instantly fundamentally transformed United States.

The conference calls and meetings surrounding the task force made it clear Barack Obama is planning to legalize and protect 13 to 15 million illegal immigrants who will then be moved onto citizenship.

When these “new Americans” come out of the shadows, the communities in which they’ve been placed will be designated as “receiving communities.”

The “new Americans” are considered “seedlings” by the White House and the “receiving communities” are the “fertile ground” to nurture them, according to comments made during the meetings.

Citizens will then be pushed into the shadows as the “New Americans” come out of the shadows.

One member of the task force said they will be forming a “country within a country”.

At the meetings, it was said that “immigrants need to be aware of benefits they are entitled to”.

The participants in the meeting also discussed the fact that these immigrants would not be interested in assimilating. They would “navigate not assimilate”.

Obama’s plan is to treat the “new Americans” as refugees as soon as amnesty is pushed through.

Refugees are given an allowance, housing, food, medical care, education, and an immediate pathway to citizenship.

The meeting participants also discussed the need to convince state and local officials to give no interest loans to the “refugees.” This way we can fund our own destruction.

All this information was available in November, only the goals were not so clearly stated.

It’s not just those who receive amnesty, it’s all the immigrants he is transporting from the Middle East, Africa, Haiti and so on.

He has tied the hands of Border Patrol and ICE. He has opened our borders and refuses to vet those who get through.

It was established at the same time as his task force and its entire purpose was to provide entitlements for “new Americans.”

We mustn’t forget that the Obama administration hand selected neighborhoods that would take illegal immigrants, most noticeably this past summer when he flew them all over the country and wouldn’t tell anyone where they were. They were not only children, there were many more adults.

Cecilia Munoz, who was in on the conference call, is tied to LaRaza and it is LaRaza and other radical open borders groups who are behind forcing illegal immigrants onto neighborhoods and then treating them like a protected class.

A HUD rule passed in July 2013 was reversed by a U.S. District Court but it does look like the plan to develop “receiving communities.”

Judge Richard Leon of the U.S. District Court for the District of Columbia reversed it because he objected to the department overstepping its powers to legislate and deliver outcomes never intended by Congress.

Reversed or not, it shows where the administration is going.

The rule by Obama’s Housing and Urban Development (HUD) would allow the government to infringe on the rights of one group to benefit another group in a “protected class”.

HUD “published the regulation pursuant to the Fair Housing Act that defines discrimination as actions or policies that while neutral and nondiscriminatory in their intent have a disparate impact, shown through statistics, on a group of persons defined in terms of race (and other protected groups)”, according to the Weekly Standard.

The rule would give the government the power to redistribute illegal immigrants, drug addicts, criminals, everyone who fits into a “protected class” according to the government’s definition throughout every neighborhood in the country and do it according to racial quotas.

The rule ties government zoning rules to HUD grants and it opens communities up to lawsuits if they refuse their quota.

It transforms neutral policies and actions into racism.

The federal government – HUD – would influence zoning laws by providing set standards, guidelines, and goals to “measure” and “assess” how well a community is meeting its Fair Housing obligations. It works in conjunction with Obama’s neighborhood mapping and his ultimate goal of redistributing all the resources in every neighborhood in the United States.

The Supreme Court will weigh in on this issue soon. Whether the Fair Housing Act supports disparate impact claims is currently pending on writ of certiorari to the U.S. Supreme Court in Texas Department of Housing & Community Affairs v. The Inclusive Communities Project, Inc., Case No. 13-1371.

It won’t matter, Obama is forcing illegal immigrants on neighborhoods throughout the country with or without this rule.

Barack Obama and his administration appear to be social engineering us into a new America.