Obama regime “bound and determined to eradicate the military and its heritage of any references to our Christian heritage and Christian beliefs”.

“On Veterans Day, Family Research Council and the Restore Military Religious Freedom Coalition honor and pray for our troops, especially those who are being discriminated against for living out their faith,” said FRC President Tony Perkins. “More and more service members are facing harassment, demotion, and formal reprimands simply for being Bible-believing Christians.”

“They’ve been prohibited from sharing their faith, forbidden from praying publicly, and dismissed from duty for refusing to surrender their religious convictions,” Perkins said.

“Defending America’s freedom shouldn’t mean surrendering theirs,” he said, “especially given that the Constitution they have sworn to uphold guarantees religious liberty as all Americans’ ‘first freedom.’”

WWII Veterans will not take Obama-imposed blockade lying down on a memorial paid for almost entirely by PRIVATE donations.  Park Service says they are ordered to arrest any further intrusions past barricades.

They were the Greatest Generation, now in their late 80’s and 90’s – going on Honor Flights to see the memorial erected in their honor by almost entirely private donations for what they achieved.  Their memorial is an open-air tribute requiring no staff, same as the Lincoln Memorial.  But His Heinous – Emperor Obama, the Petulant Man-Child, tossed his tantrum over the government shut-down – and ON HIS ORDERS, BARRICADED AND SHUT DOWN THOSE MEMORIALS.  Stephen Hayes reports via twitchy:

“At the WWII Memorial, Carol Johnson w/the Park Service says they were told to close the site by White House’s Office of Management & Budget.”

That means that the order to barricade and close the open-air memorials came from either Obama himself or his staff (Valerie Jarrett anyone?)

Not even during the Clinton-era shutdown were the open air memorials barricaded and shut down. 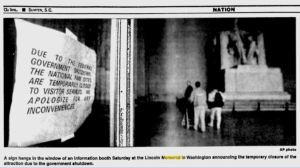 However, Honor Flight veterans who stormed the beaches at Normandy and slugged it out with the Imperial Japanese in the Pacific were not going to allow Fuhrer-Emperor Obama to stand in their way. They stormed past the barricades and went into the memorial erected in their honor, Obama’s petulance be damned.

Hilarity ensued in Washington on Tuesday when busloads of World War II veterans on an Honor Flight to visit the World War II Memorial were halted at BARRY-CADES closing it off due to the shutdown.

Having traveled so far to be turned back because of Obama’s petulance, the veterans—many of them in wheelchairs—stormed right past the gates, “pushing them over” to get inside the memorial before a Parks Department employee (still on the job somehow) relented and removed them, allowing everyone inside rather than suffer very bad ‘optics’.

It is amazing that while there is a so-called government shut-down – that the Federal Government has money to pay for personnel, file, barricades, fencing and security to blockade open-air memorials in order to keep the American people OUT of their own memorials and to stand guard when under normal conditions, they are not present.

Since Tuesday’s ‘breach’ of Obama’s ordered barricade of the nation’s memorials – Obama has ordered a redoubling of barricades and more security to keep Americans out – with orders to arrest anyone breaching those barricades.  Welcome to Obama’s Amerika.

The Obama administration is adding more barricades at the World War Two Memorial in Washington, D.C. this morning, according to reporters on the scene.

The reinforcements are being put in place apparently to prevent a repeat of yesterday when WWII veterans aided by several Republican Congressmen pushed aside barricades to visit their memorial.

Buzzfeed got no response from the White House last night when queried about the administration closing the memorial to veterans.

A report last night claimed that the Park Service would arrest veterans who attempt to visit the WWII Memorial.

By Wednesday morning, there is apparently enough money and manpower to erect a fortress of gates and wire around the open-air memorials and to station police to stand guard 24/7. 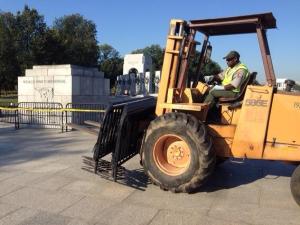 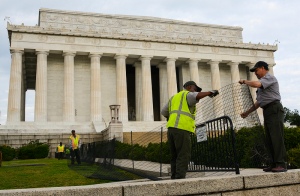 Today, there is more security and more guards at the Lincoln Memorial than at our Annex in Benghazi in 2012 when Al Qaeda attacked and killed 4 Americans including our ambassador.

The excuse the park Service offers is feeble, maintaining is that the government requires people on duty know CPR.  A bogus excuse. The Memorial is open-air and open to the public 24 hours a day, even though previously staffed only part of the day.  Most veterans are aided by family and other staff attending to medical needs.

His Heinous Obama is angry at the violation of his Barry-Cades and is sending in reinforcements to ensure that the memorials remained off-limits to Americans.  In reply, Americans and Veterans are showing up in greater numbers to the memorial today.  Another Honor Flight of vets is scheduled for next Wednesday, and a showdown between an army of Fed employees and veterans who kicked Hitler and Tojo’s asses may be in store.  The vets and their supports vow to up the ante of their protest:

Military veterans are declaring war on the government shutdown.

After a group of veterans broke down the barricades at the national World War II Memorial Tuesday afternoon, organizers of one Hero Flight Network group told BuzzFeed it wasn’t the last Washington would hear from them. Veterans are plotting another protest at the same place Wednesday, and expressed interest in staging similar events at sites across the nation’s capital, including the Lincoln Memorial — an act of civil disobedience that would likely pour fuel on the already highly flammable politics of the government shutdown.

“We have people here that are 80 and 90 years old and they closed down all the bathrooms?” said Tony Nussbaum, a 25-year veteran of the Air Force from Iowa and a leader of the state’s Hero Flight group. “I’m about to just start pissing on the trees.”

…On Tuesday, The Daily Caller reported that a Mississippi Republican representative attempted to get a special pass for the Hero Flight veterans from the Department of the Interior but was denied. A White House official reportedly told organizers, “It’s a government shutdown, what do you expect?” when asked about opening the memorial to the veterans. The White House did not respond to BuzzFeed’s request for comment Tuesday.

Reports exist that orders have come down to arrest anyone *tresspassing* the Barry-Cades.

Park ranger will not answer questions about arresting vets, says “that is an enforcement issue.”

Will aged Veterans of the Greatest Generation yet save us again from a megalomaniacal dictator and his stormtroopers?