America On The Edge Of Eruption And Chaos 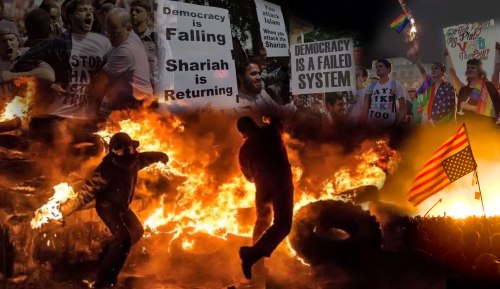 You are living in the midst of the collapse of the American civil society. The Republic is already gone and lost.  What comes next, will astound and horrify everyone who is not given over to strong delusion.

It’s all beginning to unravel, exactly as designed and intended by those who rule us.  They have knowingly set the myriad  fuses to the powder keg alight and what they now intend, defies your ability to comprehend, even when their plans are hiding in plain sight.

Anger, fear, aggression, intolerance in the name of tolerance, radical zeal for political messiahs, racial strife, gender insanity, cultural calamity, all happening during an ongoing  global economic collapse amidst fundamental transformation of the West that the vast majority of your neighbors and countrymen pretend is not happening, or is not that important to worry about.

The representative Constitutional Republic we were established as, is gone.  Oh some still pay it lip service to it in the halls of power, but just as II Timothy 3 reveals the cultural rot of the last days – so too does America acknowledge the form of a Constitution, but they deny it’s power and application.  The Democrat Party went full Marxist-Communist while the Republican Party fully funded and empowered a Dictatorship of a pen and a phone then went to war against their own constituents in order to have a seat at the table of the new order.

Most Americans have been brainwashed to think we are a democracy, mob rule that can change our foundational underpinnings whenever the mood strikes.  Who needs a First Amendment when society demands safe zones from any speech and biblical religious exercise they hate?  Who needs a Constitution When the Ruling Class and Agitators stoke the masses into demanding rulings, policies and actions be imposed to placate their appetites and stoke their zeal for punishment of those they have been told to hate?

We are openly lectured by a presidential candidate that we should be transformed into a “Socialist Democracy”, of which we already are in all practicality – but many now want to make that official.  Imbecillic morons who leech like parasites off the remaining producers in the country zealously demand the empty promises of Marxists hawking overt Communism and are eager to wage violence to demand it’s implementation in full.

More than half a population that hates the country they live in, demands freebies and entitlements at our expense while abusing the very programs supposedly meant to help them.  They demand more. They insist on more.  Then they insist they be absolved of any responsibility, and others should pay for their delights.   The nation’s economy is already in the early stages of collapse as trillions upon trillions are wasted by dependent slaves like this moron (make sure you see the last 15 seconds after this disgusting display of irresponsibility):

And the rulers demand more people like the above be granted your property and your wealth, because they say it is their right to take your wealth and your stuff because you are the wrong color, the wrong religion and your intolerant bigotry must be met with government-imposed intolerance and punishment.

Eventually and soon – the milk and honey train will come to an abrupt halt as it has in most Socialist utopias like Venezuela.  And just as we saw in Greece and Europe – conflagration and upheaval erupts, violence, bloodshed and the cries for a strong dictator to promise order and a return to a chicken in ever pot and a Smart Phone in every hand ensues.  We are already in this process of collapse, witnessing the complete and catastrophic eruption of rage and revenge that is going to grow more pronounced, more virulent and widespread as the days wane on. 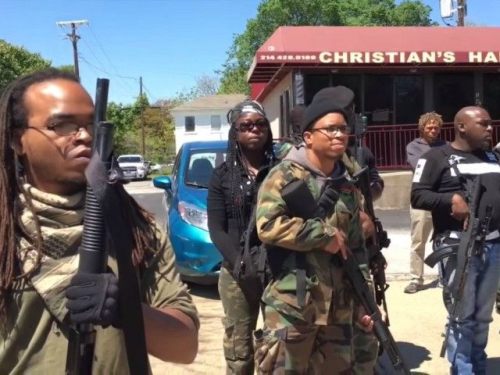 And I have not even mentioned the Caliphate, Jihadist Islam and Iran with nuclear weapons yet.

Monstrous events in such an environment usually trigger the societal powder keg to detonate, and usually the blast is much larger than even the experts suggest it will be.

But if you understand the genocidal game being played by the masterminds, the question of how to eradicate and kill tens of millions of useless eaters that the Ruling Class is convinced will not come along quietly to the new order that fundamental transformation has irrevocably initiated, everything happening suddenly becomes clear.

Then later, in the ruins of misery – the echoes of Bonhoffer and Rand and Satayana will ring in our ears if there is anyone left whose understanding of the world was not limited to TMZ and the Kardashians.

“Upon closer observation, it becomes apparent that every strong upsurge of power in the public sphere, be it of a political or a religious nature, infects a large part of humankind with stupidity. … The power of the one needs the stupidity of the other. The process at work here is not that particular human capacities, for instance, the intellect, suddenly atrophy or fail. Instead, it seems that under the overwhelming impact of rising power, humans are deprived of their inner independence and, more or less consciously, give up establishing an autonomous position toward the emerging circumstances. The fact that the stupid person is often stubborn, must not blind us to the fact that he is not independent. In conversation with him, one virtually feels that one is dealing not at all with him as a person, but with slogans, catchwords, and the like that have taken possession of him. He is under a spell, blinded, misused, and abused in his very being. Having thus become a mindless tool, the stupid person will also be capable of any evil and at the same time incapable of seeing that it is evil. This is where the danger of diabolical misuse lurks, for it is this that can once and for all destroy human beings.” – Dietrich Bonhoeffer, Papers from Prison

A conflagration is imminent. What sets it off – is yet to be seen as there are so many lit fuses flaring up, crackling and sputtering their way to the big keg of black powder that this nation has become.

Ruins, ala Rome is a guaranteed future for us all at this point. 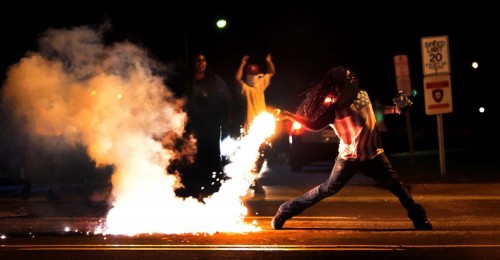 There is a limit to how much stress can be put on something before it is finally and irreversibly destroyed.  It goes by several different names.  Critical mass, tipping point, and system overload are but a few.  In each case, the term refers to an event that finally breaks the camel’s back (to use yet another term for the same thing).

Society is not merely reaching its critical mass; it is reaching it so swiftly that predictably, there will be an abrupt and catastrophic breakdown of historic proportions, eclipsing even the fall of the Roman Empire.

This is not hyperbole.  In modern times, humanity has witnessed such catastrophes.  The French Revolution with its resultant Reign of Terror was followed in later years by the Communist Revolution in Russia and even later by the rise of fascism in Germany and Japan.  Each of these events unleashed apocalyptic death and destruction.  Nor were they the end of it.

Today, however, the event is taking place in a form both more subtle and more explosive than ever before.  It is not merely the political, economic, and military structures being overturned, but the very core and foundation of humanity itself: the human psyche.

There is no need to list the examples of that.  The litany of social upheavals eroding family, morals, and education in America and Europe is well known to those who follow such things.  Likewise, the accelerating advance of technology has affected us all in its breathtaking speed.  Beyond that, radical Islamist terrorism has become destructive not merely in terms of its death toll, but also in the fact that it has become the hate that dare not mention its name.

And therein is encapsulated the nature of the catastrophe about to engulf us.  We are faced not with an enemy we cannot defeat, but with one we dare not offend.  Almost literally, we have met the enemy, and he is us.

The modern American fascists do not wave swastika banners; they go to court to force ordinary citizens to (for example) participate in same-sex wedding ceremonies by providing services to them, whether bakery or photography.  Merely to quote the Bible can bring about civil, even in some cases criminal penalties.  Students on college campuses are not free to state their political preference if that preference is Donald Trump.  Why?  Because some of their fellow students feel “threatened.”

The backlash has up until recently been silent.  That is changing.  The Sanders and Trump candidacies are merely the rumblings of a volcano preparing to erupt.  People are fed up.

No one can predict exactly what the spark will be that sets off the powder keg.  All we can say with certainty is that there is a powder keg, and there is a lit fuse.

5 responses to “America On The Edge Of Eruption And Chaos”