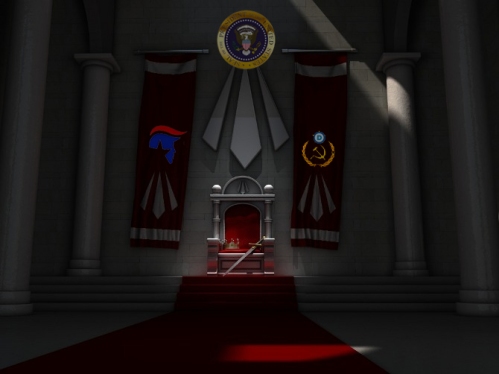 The Republic is already lost and gone.

We had a velvet coup – no one noticed, no one believes it. Yet the evidence is all there, right in your faces – and everyone pretends it’s not so. Factions and party cheering the shell game to preserve the facade of what we once were, while the masterminds play us all like cards.

Half the population has made government their god, and the other half is looking to make their chosen political messiah, king.  More than two-thirds of the country now look at the Office of President as a quasi-monarchy; a defacto dictatorship that will benefit them and their causes.  This fact is made self-evident by the numbers of people who assume that their candidate will be able to do all the things they campaign on via diktat:  Make the sea levels fall; stop the Climate; Build a wall, make Mexico pay for it;  punitive tariffs; punish banks; redistribute wealth; ban guns etc., etc., etc.  They care not for whatever character flaws, past associations, past positions or wavering statements their Chosen makes.  He/She/It will lead them and theirs to the promised land of prosperity to those who salute and support their Chosen, and everlasting punishment for those who are declared traitors for failure to prostrate themselves before their One.

The hatred and vitriol being flung at everyone who does not support their political messiah, has reached levels of frightening proportion:  Death threats; banning from social media and forum sites;  Lawsuits; Promises of retribution; calls for Party purging of those who will not bend the knee to the presumptive nominee.

Everything you are witnessing right now, are the death throes of a civil society fast devolving into the morass of anarchy, tribalism and Statism.

It’s what history teaches every failed republic goes through right before sown seeds of chaos and massive upheaval gives way to an oppressive dictatorship that a majority applauds for the empty promise of order, sustenance and revenge. You already hear and see those sentiments being expressed.

We are weak. Divided. Immoral. Ignorant. Unthinking. Unprincipled and infected with a fatal case of Normalcy Bias.

The consequences of which we are just beginning to feel.

Is that harsh?  Yes. But the truth often is.

Sadly, as history also teaches – the vast, vast majority – never wants to hear it, and often set upon those trying to warn and plead with them.

This election is not going to save us. We saw our last legitimate national election in 2008.

You cannot stop tyranny by civil means, PERIOD.  Neither can you enjoy the blessings of liberty when most of the nation no longer shares your core principles or culture.  Saving a rotting culture and discarded Republic are not possible without repentance, which even few churches and leaders are even willing to mention, much less implore. Instead we have intolerant “tolerance”, Chrislam, Black Lives Matters, Nationalist Populism and Democratic Socialism. Any opposition surrenders itself wholesale to threats or tears itself apart in virulence unseen towards those whom perpetrated their servitude.

We have yet to reap what we have already sown, and God is not going to hear a nation’s pleas in calamity when it has discarded Him.

Instead, He is going to laugh at us because He has given us over to our own ways. Proverbs 1:24-32

Truly this people demand to do what is right in their own eyes and destroy those who dare attempt to restrain their passions .  Whether it be killing their unborn, identifying themselves as the opposite sex so as to play pervert in public bathrooms, or force those “holy rollers” to participate in their wickedness and celebrate it by force of law, the vast majority turn an indifferent eye while an activist minority grow ever-more violent at any perceived slight.    The people seig-heil the candidate who affirms wickedness and denounces those as evil whom plead with a people to reconcile themselves to righteousness, to recapture and cherish a morality and heritage they no longer consider valid because “pragmatism” trumps principle.

Ever the speed of our demise increases with each passing day – and most refuse to even consider the consequence of what we have already done and permitted.

The Cup of Iniquity runneth over, and The Almighty Lord of All Creation will laugh at us when our next 9-11 befalls us.

If this makes you angry – your problem is with the truth and perhaps your faith is in men and their institutions, which gets to the actual root cause of why we have arrived at this point to begin with.