The Collective Mindset Had Triumphed Over Individualism 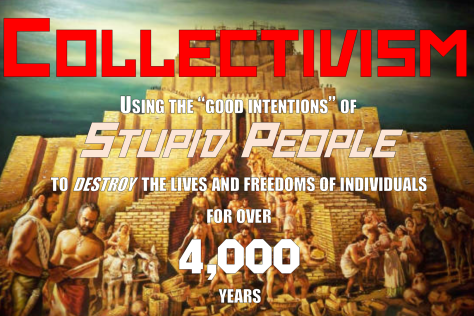 America has devolved into the mindset of Statism – either neo-Fascist Nationalist Populism or neo-Socialist Marxism.  The Body Politick divided and insistent that the other ideology will destroy the country, ignoring the fact that both purveying ideologies are Collectivists.

The following essay written by a good friend in the Liberty Movement has captured the core of the argument between Trump Republicans and the Obama/Hillary Democrats.  While many are arguing for Collectivism, the Natural Rights Movement is attempting to reacquaint an ignorant people of the discarded construct of Individualism.

I read on Facebook a lot of empty bravado calling anyone who isn’t a Trump supporter a whiney sore loser or “cry baby liberal pansy” or worse. I don’t think these types of self-satisfied people are prepared for the pushback taking place. When people see their very idea of Democracy threatened it awakens something. We will allow a plutocracy to prevail and push women & minorities back to the 50s over our cold. dead. bodies.

Noam Chomsky: With Trump Election, We Are Now Facing Threats to the Survival of the Human Species

These guys, along with “Democracy Now” are nothing but a bunch of Collectivists who are perfectly fine with tyranny — tyranny is what Collectivism breeds.

Where were their criticisms of the Obama administration when it bailed out the massive banking corporations in the exact manner as did the Bush administration?

Where is their criticism of the Obama administration when he signed the NDAA of 2012 which legalized rendition?

Where is their criticism of the Obama administration which also just declared CBD to be “non-medicinal” and now a schedule 1 drug?

Why are seemingly intelligent people championing such anti-liberty actions of Collectivists on “both sides” of the false political paradigm?

Why worry about what Trump *might* do when these Collectivists have no regard for all the evils of past administrations?

This all just seems like total insanity to me. After all, it’s the Hillary supporters who had been rioting and destroying the private property of other individuals.

I cannot take anything these Collectivists have to say seriously due to their blatant hypocrisy.

I find it very sad that the masses continue to worship the STATE rather than stand up against such tyranny.

In today’s society, totally ignorant of the history of such philosophy breeds comments such as:

Can you give an example when your vision on non-“collectivism” has been implemented?

…Even if I could give such examples of how the Philosophy of Individualism has been implemented at the founding of America’s Civil Law through the honoring and protection of our Natural Rights, it wouldn’t justify the hypocrisy these collectivists exemplify in only criticizing one side of the partisan duopoly for such violations of our Natural Rights.

Please don’t misunderstand, I am equally as critical of so called “Conservatives” when they act likewise hypocritical.

My point is that the masses continue to listen to hypocritical collectivists who are deceiving them into believing that only the other so called “side” of the false political “left-right” dichotomy is tyrannical.  Call them fascists or socialists, they are all collectivists.  And by definition of their chosen philosophy, they do not honor the unalienable Natural Rights of the individual.

The Philosophy of Individualism has been implemented in America’s Civil Law from the onset, albeit imperfectly — certainly, slavery in America was hypocritical to our founding documents.  However, it should also be noted that pre-Civil War America’s slavery population was ~13%.  Compare that to the present situation whereby nearly everyone has become “wage” slaves of the STATE.  It’s supposed to be the other way around.  the STATE is supposed to be our servant.

Natural Rights principles are what our entire founding documents were created upon.  They are what Jefferson penned as being “self-evident” in the Declaration of Independence.

Examples of Individualism in America’s onset include:

the STATE didn’t violate or engage in the private free market of medical care and medicine (i.e.: the STATE waged no selective drug wars, so people were free to choose drug remedies by their own free will); the STATE didn’t force out of business or out of the country medical scientists who provided remedies that had a proven track record of success for people’s ailments; the STATE didn’t mandate uncontrolled dosing of the masses through their water supplies of chemicals proven to be toxic; etc…

the STATE used to honor this principle, yet there are a myriad of instances where individuals are treated as guilty until proven innocent; tyrannical acts such as rendition were not practiced by the STATE (while rendition had been likely practiced illegally by previous administrations for perhaps decades, it has only been recently legalized by the most recent administration as previously noted).

there was never originally a so called “income” tax in America; the founders mandated such direct taxes to be illegal, for it was self-evident that every individual had the right to the fruit of his/her own labor AND the right to keep one’s personal affairs private; the STATE didn’t engage in “civil asset forfeiture”; the STATE didn’t engage in massive general spying on its citizens; the STATE never prohibited gardening or farming on one’s own property.

the STATE didn’t violate violate one’s Natural Right of self-defense by prohibiting or interfering with individual armament (in fact, it was militias of individuals who volunteered to fight in the Revolutionary War in order to maintain this paramount Natural Right… now, such collectivists I criticize desire to entirely disarm Americans who have not violated the Natural Rights of others, thus another example of guilty until proven innocent).

the STATE didn’t initially control or manipulate currency, nor did it infringe upon free market commerce; private individuals were free to engage — or NOT engage — in their private business with others according to their own free will and without ANY STATE intervention whatsoever; business licenses didn’t initially exist because it was self-evident that individuals have the Natural Right to profit and therefore survive; marriage licenses didn’t originally exist — marriage is not only a private matter, but also one of CHURCH rather than STATE… remember “separation of CHURCH & STATE”?  😉

[noteworthy: a “license” or “permit” means that the STATE is asserting it’s authority over the individual — as “master” — giving the license/permit bearer *permission* to do something that the individual doesn’t have the Natural Right to already do.]

We could go on about how far more tyrannical America has become since its Individualistic leaning onset, resultant of embracing Collectivist principles.  But basically, if one wasn’t violating the Natural Rights of anyone else, the STATE at most all levels didn’t interfere in the private lives of individuals.

… That was the original concept anyway, and I submit that these principles define libertarianism, however, definitely not according to the Libertarian Party.  The LP is largely divided by libertarians, and anarchists who call themselves “libertarians”.  There are also anarchists who call themselves “voluntarists” (or some form thereof), no doubt hoping to make their false ideology sound more alluring to the ignorant

However, by contrast libertarians understand that if no one ever violated the Natural Rights of anyone else, there would be no need for government at all, and therefore, anarchy could actually work.  We also realize that this is a fantasy.

We who live in the real world of human society, and are of sound mind, acknowledge that some people will always violate the Natural Rights of others.  Therefore, limited government having the primary if not sole function of protecting the Natural Rights of ALL individuals is necessary for a society whose goal is to maximize peace, prosperity, and liberty for ALL.

But I have digressed…

Of course, maintaining a libertarian leaning republic didn’t last long.  Government continued to wax corrupted and powerful, thus a new tyranny was born and since fostered by the advance and then mass indoctrination of Collectivist philosophy.

…taking this time to exemplify some of the various ways tyranny has grown in America is helping to encourage me in my goal of fleshing out the www.NaturalRightsCoalition.com website, especially to address various Natural Rights violations by the US Government at all levels and offer practical solutions that end all such violations.

I truly believe that Natural Rights principles, which are all also rooted in the “Golden Rule” shared by many cultures of commoners throughout all of human history, are unifying rather than dividing.  And right now, there is only growing division in “Neo-Amerika”… and that’s not sustainable — Untied We Stand, Divided We Fall.

3 responses to “The Collective Mindset Had Triumphed Over Individualism”